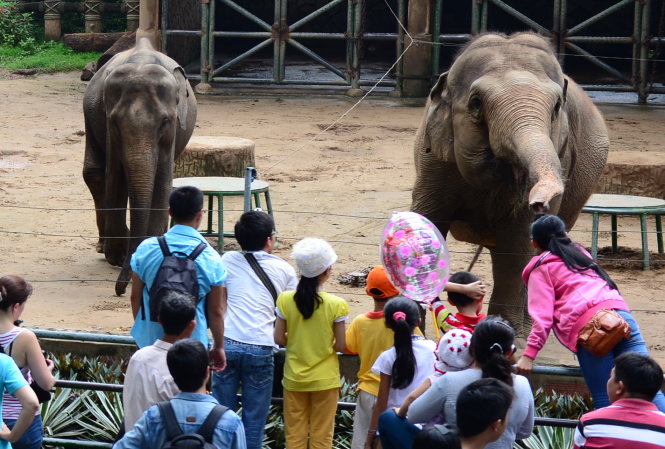 An official from the Ho Chi Minh City zoo has confirmed the botanical and zoological garden, one of the city’s hallmarks, will remain at its current site near the city’s downtown and will see massive upgrades.

Rumors have recently spread that the Saigon Zoo and Botanical Garden, located in District 1, would be relocated to a spacious plot in the outlying district of Cu Chi, and the entire facility would be torn down to make room for a commercial complex.

The zoo, which was first opened to the public around the 1860s at its current location, has left unforgettable childhood imprints on generations of city dwellers.

On Monday, an official of the Saigon Zoo and Botanical Garden Co. dismissed the rumors as groundless.

“The municipal government has long wanted to revamp the current zoo, but its closure is entirely out of the question,” the official confirmed.

During the renovation, items deemed no longer appropriate will be removed, while the old structures featuring French-style architecture will be retained as they are.

“We will touch up our botanical items, intended to enrich the city’s greenery, while moving a number of large animals which need ample living space to Cu Chi,” the official added.

The company is currently working on a project to build the Saigon Safari Park in Cu Chi.

The new park, approved in 2004, is being constructed on a 485-hectare plot some 50 kilometers from the city’s heart, he revealed. Upon completion, the Saigon Safari Park, which will cost US$500 million, is expected to be the country’s largest ecotourism park and will emulate its counterparts in other Southeast Asian countries.

The complex will boast a wide array of activities on wildlife conservation, research, exhibition, and breeding, with due attention to the country’s and world’s fauna varieties which are teetering on the brink of extinction.

A Singaporean contractor has been picked for the project, which has yet to begin due to problems with housing relocation and the foreign design consultants’ fee quotation.

The zoo official noted that though the park in Cu Chi will provide a more suitable habitat for many large animals, his company will keep species such as giraffes, elephants, and hippos at the current zoo, as transporting them would be a daunting task.

Improvements will be made to their living spaces, he stressed.