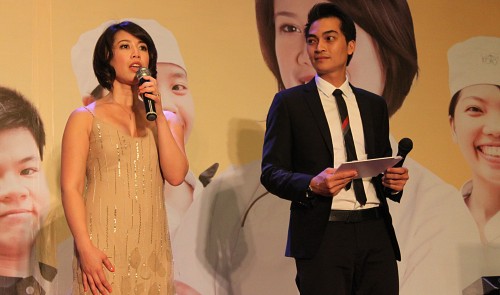 Christine Ha, the visually impaired winner of U.S. competitive reality show MasterChef 2012, is set to serve as an official judge of the show’s Vietnamese version.

Ha, who took part in two previous seasons as a guest judge, will be among the main jurors of MasterChef Vietnam’s third season.

After her participation in MasterChef U.S. 2012, the American cook of Vietnamese origin attracted a huge number of followers and fans thanks to her friendliness, simplicity and enthusiasm for cooking.

The 35-year-old chef is expected to win the Vietnamese audience’s affection and inspire contestants this year with her delicious plates and helpful evaluations, as she did in the previous seasons.

Preliminary rounds are slated to be held in the capital city of Hanoi on August 4 and in Ho Chi Minh City on August 11.

Fifteen episodes of MasterChef Vietnam are scheduled to air at 8:00 pm starting from early September on VTV3 – an entertainment channel of national broadcaster Vietnam Television.

MasterChef Vietnam, whose copyright was purchased by VTV3 and BHD Multimedia Company, was broadcast for the first time in 2013.

Since originally airing in the UK, the show has expanded to other countries with their own versions.

MasterChef Australia and MasterChef U.S. are the most well-known shows.

Christine Ha, who has long been known as a chef and writer, was the first blind contestant in the history of MasterChef U.S. and was crowned champion of the reality show’s third season thanks to her three-course Vietnamese meal.

The meal included Thai papaya salad with crab, with the addition fish sauce, the signature Vietnamese seasoning; braised pork belly with rice; maitake mushrooms; crispy kale, which is a common dish in Vietnam; and coconut lime sorbet with ginger tuile.

In the qualifying round, Ha also wowed the jury with her Vietnamese ca kho to dish, catfish braised in a clay pot with caramel, coconut juice, garlic and fish sauce, served with pickled vegetables and rice.

Besides a $250,000 grand prize as the champion, Ha won a cookbook deal that allowed her to publish her first work, “Recipes from My Home Kitchen: Asian and American Comfort Food,” which later became a New York Times bestseller.