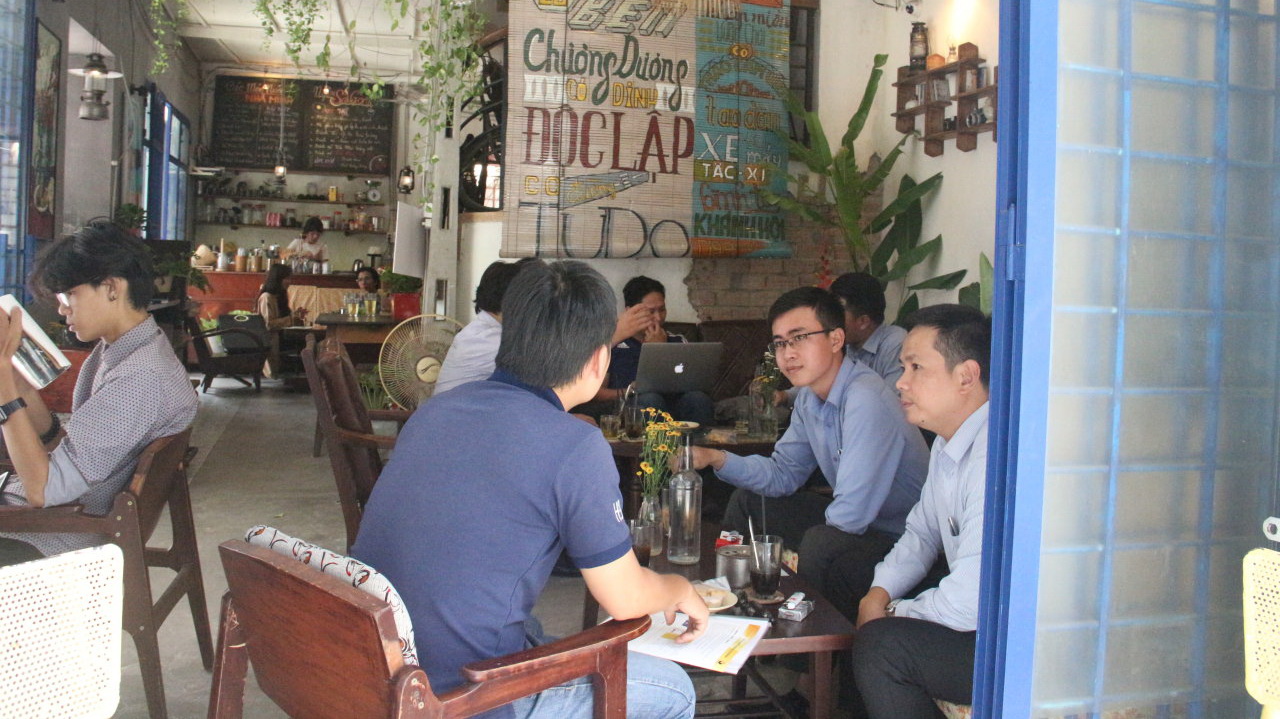 Born and raised in the idyllic and generous land known tenderly as Saigon, the young generation in the city now rushes to open retro-style cafés to relive its vibes in the good old days.

They offer visitors, besides coffee, their own visualization of how life was like in Saigon in the past through the stories of their parents and grandparents.

It was early in the evening inside a cozy, oil lamp-lit coffee shop on Truong Quyen Street in District 3.

An age-beaten radio was playing the immortal songs of 20th-century Vietnamese composers Trinh Cong Son and Ngo Thuy Mien from the corner of the room.

“I often come here with my friends to chat and listen to the music on weekends,” said Thuy Linh, a regular customer. “The coziness and rusticity of the shop are comforting.”

According to Linh, the calming atmosphere helps bring people closer together and make them put aside their smartphones to actually engage in real conversations with their friends.

Sometimes, Linh said, she would let her mind wander with the melodies on the radio.

In a limited but hardly cramped space, household items of the past such as black-and-white TV sets, mechanical typewriters and rotary dial telephones are scattered here and there just enough to remind visitors of the setting of the store.

“My café revives the atmosphere of Saigon in the 1980s,” said Thuy Quyen, its 27-year-old owner. “I want people who come here to feel as comfortable as they would in their own home.”

Located on another tranquil street – Tran Quoc Toan – in District 3, the coffee shop run by Tran Huyen Quang, 29, is the recreation of a house of an intellect in former Saigon, now officially called Ho Chi Minh City.

The flower-tiled store features a balcony, a dining room, a living room and a kitchen, all adorned with items no longer seen in modern households.

Music in the store is played from vinyls and old cassettes, bringing memories of the past to visitors.

Music is played from a vinyl at a retro-style coffee shop in District 3, Ho Chi Minh City. Photo: Tuoi Tre

“I’ve been thinking about how knightly, generous and elegant people in Saigon in the past must have been through the stories told by my dad,” Quang said. “I started planning on a coffee shop where people could be reminded of such virtues after graduating from high school.”

But it was only ten years later, in 2016, that Quang could finally realize his dream.

According to Quang, items and decorations in the shop have their own stories of how they came to be in his possession.

Some had been passed on from generation to generation in his family, while others he had collected from the streets after they had been thrown away, Quang said.

“There was a neighbor who donated his sofa when he saw that I was opening a retro-style coffee shop,” Quang said, gesturing at a worn-out sofa.

For Quyen, her decision to open the coffee shop began after she noticed how youths are spending less and less time on contemplation in modern, fast-paced life.

“They live too hastily in modern coffee shops,” Quyen said. “I wanted to open a place where people can live slower and spend more time contemplating life and finding peace within themselves.”

It was only a matter of chance that Quyen came across the wedding album of her parents, dressed in the fashion of the past, which prompted her to realize her vision with a retro-style café.

“Upon hearing my plan, my mother took out a ton of old items she had been keeping all those times, from ceramic wares to spoons made of airplane aluminum,” Quyen recalled.

Having quit her job to fully dedicate her time to the coffee shop, Quyen said what gave her joy and inspiration was seeing people from all walks of life sit down together over her coffee and unwind away from all the hustle and bustle of the outside world.