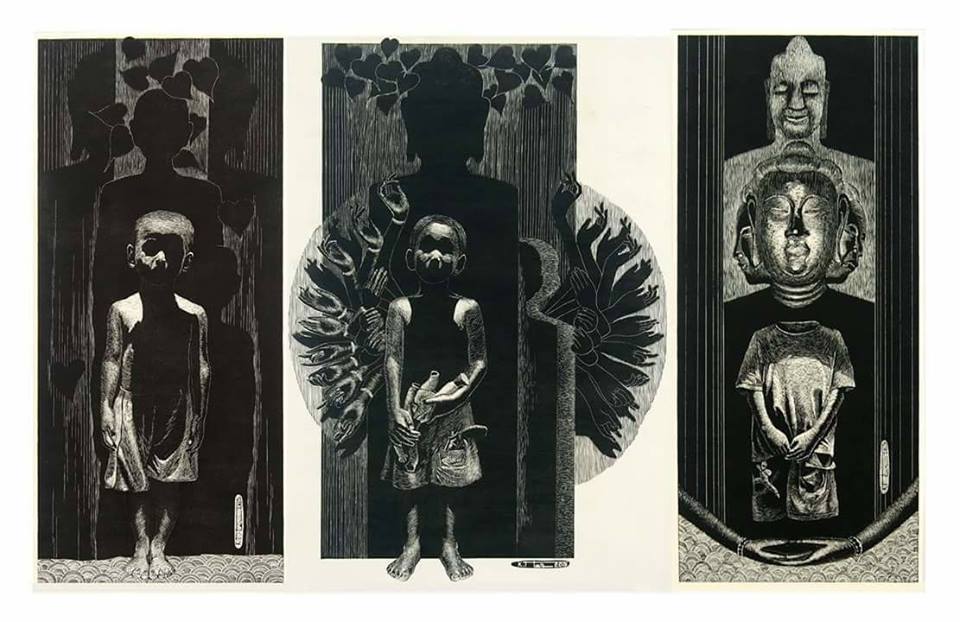 ​Another day, another plagiarism scandal in Vietnam’s art market

The artist behind two paintings on display at the Museum of Fine Arts had his grant revoked and work removed from an exhibition in Ho Chi Minh City after he was found to have plagiarized a famous wood carving.

Artist Nguyen Truong An was awarded a VND5 million (US$220) grant by the Ho Chi Minh City Fine Arts Association for his two-piece lacquer work An Lac (Serenity) as part of a creative initiative to encourage young talent.

However, as an exhibition of select works by artists involved in the initiative entered its third day on August 25 at the Museum of Fine Arts in the southern metropolis, its organizers made the difficult decision to remove the paintings from both physical and online displays.

“He did not plagiarize my idea; he plagiarized my entire work,” Han told Tuoi Tre (Youth) newspaper. “Anyone who compares the two works side by side would agree that Nguyen Truong An has simply recreated my woodwork in his paintings. It’s a breach of my copyright.”

This is far from the first time the Vietnamese art market has been hit by a plagiarism scandal.

Last year, prominent Vietnamese artist Nguyen Thanh Chuong sent the local art scene into a frenzy after discovering a portrait he did in the early 1970s was on exhibit at the Fine Arts Museum in Ho Chi Minh City from July 10 to 21, 2016 under the name of late painter Ta Ty, one of Vietnam’s most well-known artists.

An evaluation panel assembled by the museum later determined that none of the 17 paintings on display at the exhibition were created by the painters that had been credited, striking a blow to an event billed as a triumphant homecoming for artwork created by some of Vietnam’s most influential artists.

Vu Xuan Chung, owner of the collection, disputed the museum’s findings and maintained that the paintings were authentic, citing certification from French art expert Jean-François Hubert, a senior consultant for Vietnamese art at Christie’s.

In May, a work credited to renowned 20th-century Vietnamese artist To Ngoc Van was denounced as a forgery of The Young Beggar by 17th-century Spanish painter Bartolomé Esteban Murillo only a week after it sold for US$350,000 at a Christie’s auction in Hong Kong.

“I’m not sad for him. I’m not sad for myself. I’m sad for an entire generation of Vietnamese artists,” Han said. “How can our art industry move forward if there are still such artists out there?”

Meanwhile, deputy chairman of the Ho Chi Minh City Fine Arts Association Siu Quy tried to remind critics that the plagiarist is still only an art student and should therefore deserves a more forgiving response.

“In the field of fine art, it is inevitable to be influenced by masterworks. Not every artist has the skills to develop their own ideas from a source of inspiration,” Trung said. “Young artists are particularly prone to making such mistakes.”