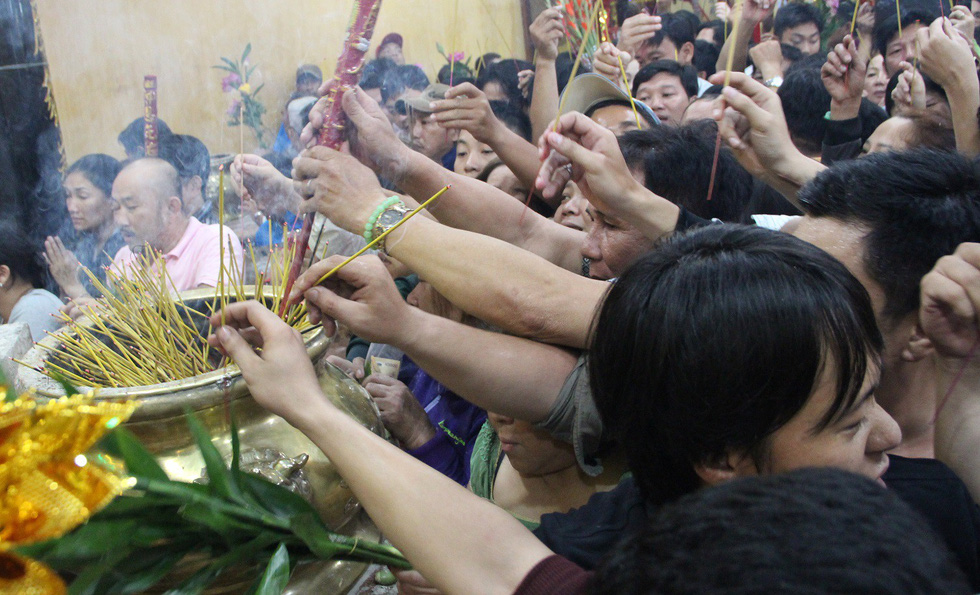 Vietnamese people have flocked in droves to temples in the first days of March in order to ask for good luck from the sacred.

A number of major festivals and ceremonies are held between late February and early March, coinciding with the festive first month of the lunar year.

At 11:00 pm, thousands of people were gravitating to the Thien Hau Lady Temple in Binh Duong Province, a neighbor of Ho Chi Minh City.

They filled the place, which is one of the locations boasting the largest number of visitors in southern Vietnam during the first lunar month festivals, in order to offer burning incense in the hope of obtaining blessed fortune for the entire year.

Many visitors elbowed each other out of the way, struggling for some ash – material also deemed lucky – from the incense burner.

An influx of people jostled each other and flooded through the temple entrance, disregarding a request for public order flaring continuously from the loudspeaker.

Disorder also ruled from 9:00 pm on Tuesday at the Tran Temple in Nam Dinh, northern Vietnam, a famous complex of buildings dedicated to emperors whose surname is Tran.

Iron railings had been erected in front of the temple’s gate to enable the selective arrival of visitors, who increased in number as midnight drew closer.

Only visitors with invitation cards were allowed to access the complex to attend a ceremony of opening a royal seal, after which they could ask for the seal stamp on a piece of paper as a sign of good fortune.

Many of the visitors on the premises failed to restrain their anger at the police taskforce working there, who numbered over 2000.

Some ineligible participants even attempted to enter the place through a different entrance but were thwarted by the guards.

A man named N.H. from a neighboring province said he always visited the temple every year although he was very busy and did not know the actual meaning of the seal opening ritual.

Here are scenes from the Thien Hau Lady Temple.

The following photos illustrate part of the situation at the Tran Temple.