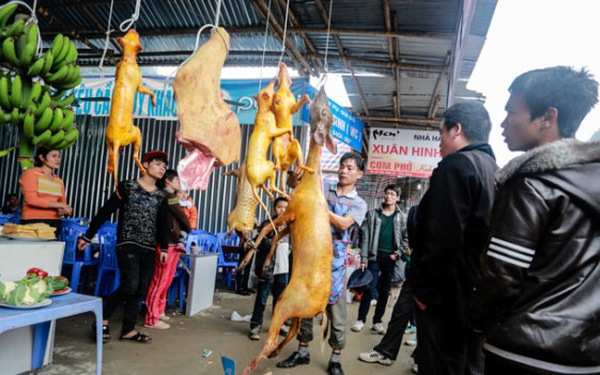 When it comes to wildlife, many Vietnamese people only care if an animal fits to be eaten, rather than how to protect them, an activist said at a conservation exhibition in Ho Chi Minh City late last month.

Mzung, a filmmaker and environment activist, told other young conservationists at the talk held on the sidelines of the exhibition titled “The Scream – Call of the Wild” that the conceptions about wildlife many Vietnamese still hold need to be changed.

“In other developed countries, when talking about porcupines, deer, pheasants, people will ask what the animals look like, where they live, what they eat,” Mzung said at the April 23 talk.

“Meanwhile, in Vietnam, the first thing many Vietnamese people want to know is if they are good to eat.”

Mzung said the popular misconception that wild animals, which only eat plants in the forests, will produce nutritious meat is to blame for the fact that Vietnamese people have a liking for wild animal consumption.

"Many people are willing to pour money into rhino horn, bear bile, pythons or snakes, and it is challenging to change that notion,” she underlined.

The April 23 event was hosted by young Vietnamese conservationists, with the desire to bring the most honest view to the public as well as calling for action from the community.

The young organizers come from a variety of backgrounds.

Joining Mzung on the stage were Trang Nguyen, an international social activist on fighting wildlife trade since 2013, and Dao Van Hoang, an amateur painter who chooses wildlife conservation as the main theme of his works.

During the almost five-hour talk, the conservationists and people fascinated by nature openly discussed the disappointing state of wildlife conservation in Vietnam.

Humans are largely involved, either directly or indirectly, in wildlife hunting, trading and consumption activities, according to the speakers.

“People hunt and kill animals in Africa to get ivory, horn and feather, or use them to make wine, due to huge market demand in Asia, particularly Vietnam,” Trang Nguyen, an independent artist who is pursuing her doctoral studies in the UK, said.

The activists reminded the audience of such alarming facts as the current rate of extinction of animals has become increasingly faster, with three to four rhinos and 96 elephants killed in Africa every day, or the world’s last surviving male northern white rhino already died in Kenya on March 20.

It is also predicted that the number of mammals, birds, fish, reptiles and many other animals in the world will decline by about two-thirds by 2020.

Vietnam has recently confirmed that no wild tigers are left in the country, whereas an elephant in the Yok Don National Park in the Central Highlands province of Dak Lak is in a crucial condition with the necrosis foot, and two-thirds of its trunk and ivory cut.

Mzung said that there are too few pioneers in wildlife conservation in Vietnam, as the work of conservationists is not flashy and praised.

Both Trang Nguyen and Mzung are working on projects for children "to have a generation of love and a sense of nature protection,” they shared at the event.