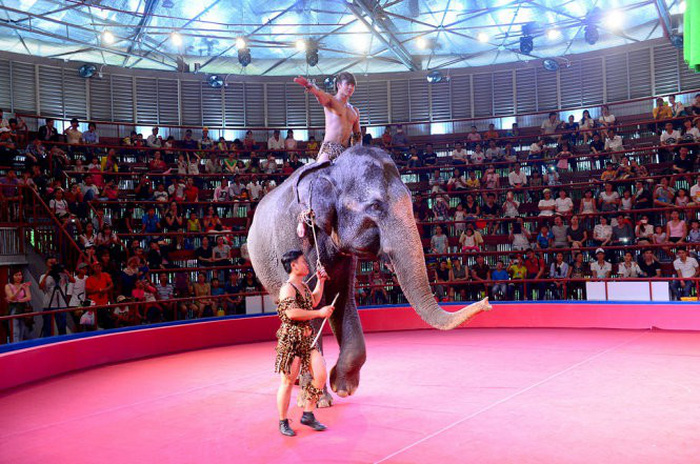 Circus performances using wild animals at a theme park in Ho Chi Minh City has been halted following a request recently sent to Vietnamese authorities from the Asia for Animal Coalition (AfA).

Du Huu Danh, director of the Dam Sen Cultural Park in District 11, has confirmed to Tuoi Tre (Youth) newspaper that they will temporality stop organizing circus performances using animals for the general public, pending a further decision by competent agencies.

The entertainment activities will only be conducted for those having bought tickets in advance, Danh said, adding that the performances would only involve dogs and monkeys.

Such animals as bears and orangutans, which were mentioned in an AfA petition, will not be included in these performances, the director noted.

“We will wait for the official decision from competent authorities,” he stated.

In a letter recently sent to Vietnamese Minister of Culture, Sports and Tourism Nguyen Ngoc Thien, the AfA said it is gravely concerned about wild animal abuse in circus performances for entertainment purposes throughout the Southeast Asian country.

The coalition also particularly mentioned Dam Sen Park in its petition, requesting a revision to be made to the use of animals in circus performances at this popular venue.

The AfA also questioned the public records of the origin of these creatures, suggesting that some animals are being illegally held captive and should be rescued and taken to animal protection centers.

According to Danh, the park only organizes circus shows on weekends and holidays.

The shows are well prepared and performed by a team of professionals, he said, adding that the venue had completed necessary legal procedures for the activity.

“We first used only dogs, monkeys, and elephants during the shows, while bears and orangutans were added about two years ago,” he elaborated.

All animals have legitimate origin, and the bears had microchips implanted in their body and are managed by local protection centers, Danh stressed.

He noted that Dam Sen Park has yet to receive any letter from the AfA and only knew about it after reading an article in Tuoi Tre.