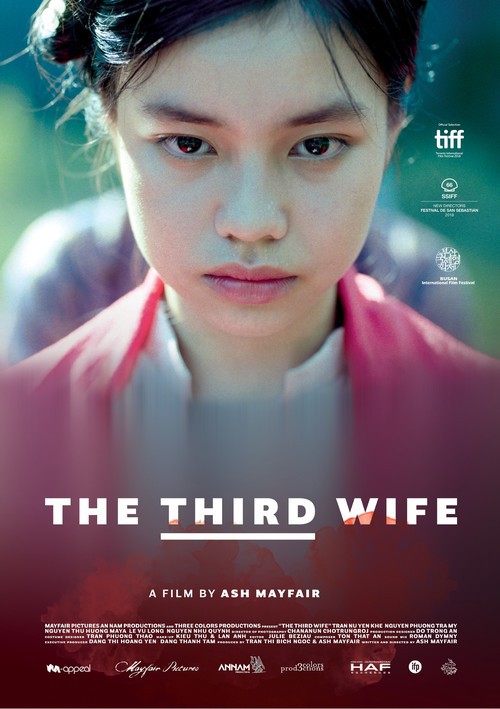 The Vietnamese film “The Third Wife” was recognized as Best Asian Film by NETPAC (Network For The Promotion Of Asia Pacific Cinema) at Toronto International Film Festival on Sunday.

After the premiere, the judges honored the movie based on its artistic value, language, and the promotion of history, providing the audience with a thoughtful and proper insight.

It successfully outperformed many other Asian movies at Toronto International Film Festival 2018.

Ash Mayfair, or Nguyen Phuong Anh, directed the movie in cooperation with producer Tran Thi Bich Ngoc, one of the well-known Vietnamese producers.

The movie features many stars including People’s Artist Nhu Quynh, singer Maya, Le Vu Long, and Nguyen Phuong Tra My, among others.

The storyline was inspired by Mayfair’s own experience in Vietnam, where she was aware of the practice of arranged and child marriage in well-off families.

This is not the only prize the movie has won.

Other prizes and recognitions include White Light Post-Production Award, the highest recognition from Jerome Foundation, Autumn Annual International Cinema Event Meeting, and others.

The movie received many good reviews thanks to its originality and the issues it raises including arranged and child marriage, the importance of bearing a son in old Asian societies, as well as the lives of women in the 19th century.

It tells a story about May, performed by Nguyen Phuong Tra My, a 14-year-old girl forced into an arranged marriage with an old landlord, by Le Vu Long, a common practice in the old society of Vietnam which, despite the laws in many countries, still prevails in the less developed regions of the world.

Set in the 19th century Vietnam, May becomes the third wife of the landlord and is welcomed by two other wives and taught about the values of marriage as well as the importance of having a son.

Her life takes an unexpected turn when she starts having feelings for the second wife of her husband.

The Third Wife has been bought by Film Movement and will start screening to the public in North America in 2019.

Another Vietnamese movie that has won the NETPAC award is "Nostalgia for Countryland" (1996) directed by Dang Nhat Minh.

Ash Mayfair was born in Vietnam and educated in the UK and the U.S.

Many of her short films have been screened at numerous film festivals, but The Third Wife is her first feature as a writer-director.

Even though the NETPAC award is not the main one at the festival, it is one of the most important regarding the promotion of Asian movies on the international scale.

Films at Toronto International Film Festival are chosen by audiences rather than by well-known and influential figures of the industry like at other festivals including Cannes, Venice, and Berlin, among others.