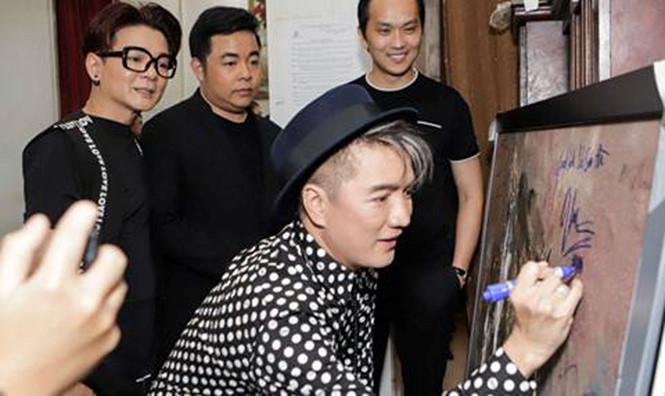 Vietnamese celebs criticized for signing on painting after charity auction

A group of famous Vietnamese singers have infuriated local painters after they were found leaving their signatures on an artwork that was auctioned for charitable purposes.

The public figures involved in the controversy were the organizers behind an auction event named “Tinh Nghe si so 15,” the fifteenth edition of a campaign where celebs raise fund to help needy fellow artists.

The August 30 event in Ho Chi Minh City was held to gain financial support for two actors, Mai Phuong and Le Binh, who are suffering from lung cancer, by putting a drawing by renowned Vietnamese artist Hua Thanh Binh, one of the influential and prestigious names in the country’s contemporary painting, up for auction.

The auction was considered a success with the painting and other items successfully found buyers, bringing in VND835 million (US$35,905) for the organizers, according to Zing.vn.

However, two months after the event, photos of the aforementioned celebrities leaving big signatures directly on the front of the sold painting suddenly surfaced and went viral on the Internet, provoking anger from the insiders of the art industry.

As of Sunday morning, several artists have taken to the Internet to express their disapproval of such behavior.

Painter Nguyen Thanh Binh criticized that leaving autographs on a painting is an indicator of a “lack of culture.”

“This is a kind of destruction to the drawing,” Nguyen Thanh Binh said. “They need to apologize to artist Hua Thanh Binh.”

Artist Siu Quy, standing vice president of the Fine Arts Association of Ho Chi Minh City, wrote on his personal page “The auction for Mai Phuong and Le Binh’s treatment is a very humanitarian charitable work but the way the people in showbiz treat an artwork made me so heartbreaking.”

“Are they auctioning a painting or their autographs?” Quy angrily said.

Painter Luong Luu Bien, another Vietnamese artist whose collection used to be exhibited in France, also commented: “The charitable purpose is good. But I feel sorry for their action of signing on someone else's painting.”

According to director of Ho Chi Minh City History Museum Hoang Anh Tuan, “the author of the painting was crying silently after hearing the news.”

Singer Dam Vinh Hung, one of the singers involving in the scandal, on Monday spoke his mind upon the controversy, after remaining silent for a day.

According to the singer, the auction was already over when the artists began to sign on the artwork.

Hung underlined that it was the buyer who got to the backstage to request for a photo with the celebrities and their autographs on the drawing.

“We could hardly reject such a request from the buyer,” Hung explained.

The Tuan, director of the history museum, also confirmed this detail.

Dam Vinh Hung explained that he and the singers participating in the program, who are not professional painters themselves, did not understand that signing on a painting could mean disrespecting its painter.

“We were inconsiderate and just intended to meet the buyer’s request, but didn’t think about the artist’s feelings,” Hung excused.

The 47-year-old singer also said that it was around 00:00 am when the artists signed the painting.

“It was midnight so it was inconvenient to call the artist [to ask for his opinion before signing],” he admitted.

“I wish we were thoughtful enough to make the call, so we would have known we were wrong, and did not sign on it.”

Hung went on to send his apology to artist Hua Thanh Bui, saying he “has just realized his misbehavior after the last two days.”

“If it is something wrong, I would like to represent the artists to apologize the painters.”

“Specifically, I extend my apology to artist Hua Thanh Binh. We wish that you will forgive our shortcoming,” the singer sincerely expressed his regret.

Female singer Le Quyen, who was seen signing on the painting along with Hung in the photos that went viral on social media, also told Thanh Nien (Young People) newspaper that the group of celebrities had apologized to artist Hua Thanh Bui at that time and expressed their hope to be understood.

“We did not expect the issue would be suddenly brought up again after such a long time. Don’t know what for,” Quyen added.