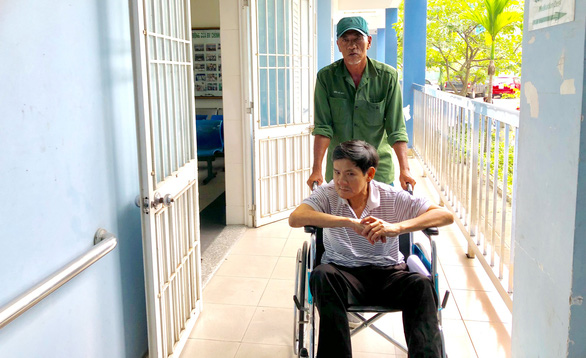 A motorbike taxi driver from the central Vietnamese metropolis of Da Nang has won widespread admiration as he helped a passenger who lives in penury and has had a serious disease whose revelation recently petrified them.

The responsibility for a passenger may end when the service is completed, but for conventional motorbike taxi driver Nguyen Rem, 62, helpfulness should be extended even after the customer has long got off the vehicle.

One may call it friendship but kindness is the overarching word.

These days Rem often visited the hospital to look after one of his passengers, a man named N.T.H., who he had brought here several days earlier.

“Oh, it isn’t worth attention. Everyone would act the same way as I did,” Rem answered after being told that many netizens praised his deeds toward H.

“H. has a poor family and is suffering from a disease. I couldn’t go away without helping him.”

Rem came to H.’s sickbed just several minutes after receiving a phone call from him.

Rem also visited the institution, sometimes providing the man with clothes and food, asking about his well-being and encouraging him to overcome the illness.

“When H.’s leg hurt, he shouted at Rem but the driver kept giving him care. This is what even I can’t do here. It’s so admirable,” said Nguyen Thi Thu, a family member of a patient at the infirmary.

Rem’s thoughtfulness for H. made she mistakenly think they were brothers, she added.

Visiting the patient many times caused a disruption to Rem’s service but he accepted that.

“Everyone needs money. But you should sometimes take money as less important in order to treat others nicely in life,” Rem said.

Three years ago, H. approached Rem, who was awaiting customers on his motorcycle, and asked the driver to take him to the hospital for a medical checkup.

When Rem arrived at H.’s house at his request for following ride services, the driver knew the customer had a serious pain in the leg, a blind mother and an elder sister with heart condition and slight mental illness.

Rem said he wanted to receive a reduced price for his service but H. declined the offer and paid in full.

H. also refused to have photos of his plight uploaded to social media in order to evoke pity from the public, the driver said.

“That’s why I have sympathy for him. He may be stubborn but he’s a man of dignity,” Rem said.

On a recent day, Rem came to H.’s house again to take him to the hospital as the man was racked with pain, unable to rise to his feet.

“I sometimes yelled at him angrily when I was having the agony. But then he was just beginning to talk about something else and waited for my anger to subside to give me heartening words,” H. said in the hospital.

Two days ago, H. was diagnosed with bone cancer, leaving him and Rem in shock.

Now the driver has often dropped in on H. at his home, giving him encouragement in the face of adversity.