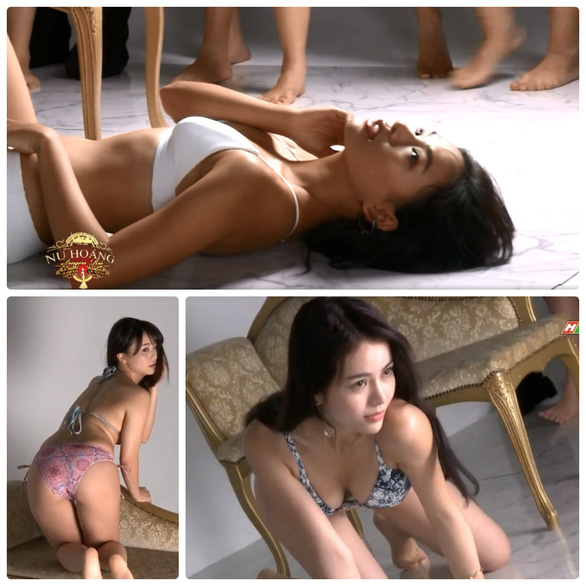 A prime-time reality TV show aired on a Vietnamese television channel has been blasted over a recent episode that involved female contestants in provocative bikini poses.

Many viewers have said the producers of the Nu Hoang Quyen Ru (Glamour Queen) should not be so inconsiderate to have such sensitive images broadcast on TV, especially during prime time, the period when TV programs are expected to attract the largest number of viewers, including children.

The 14th episode of the show, which became controversial, was aired on Monday night, showing the top five finalists traveling to Japan and competing in a photo shoot challenge organized by the Japanese publishing company Kodansha.

Hirajima first showed the five candidates photos she took for a magazine in sexy and seductive positions, before making similar suggestive moves as a live demo.

The Vietnamese candidates, all in two-piece swimsuits, then took turns to make the poses themselves.

Some of the candidates admitted that they found the required posing positions to be too provocative.

“I was terribly confused about if those positions were too sexy and too offensive,” Kim Anh, one of the five finalists, said in the episode reviewed by Tuoi Tre News.

Anh was right. The episode immediately attracted criticism from the public after it was aired on HTV on Monday, not only because it contained ‘sensual’ scenes but also because it was run during a time slot when many children might be watching TV with their families.

Addressing the controversy, a representative of the producers explained on Tuesday that the episode in question was completely made as per the show’s original format, which requires contestants to undergo training by Japanese models, singers, and producer teams “to become photography models for a swimwear project by Kodansha."

The representative also elaborated that all training and activities in Japan in the 14th episode followed strict requirements from Kodansha’s studio, with all recording files sent to Japan for approval before their broadcast on Vietnam’s TV.

For their part, a leader from HTV said that the TV station acknowledged the negative feedback from the public, and had already instructed the production team to draw experience from the controversy.

“The production team has also been required to adjust the content in the next episodes, in accordance with the nature of the show, while avoiding a similar backlash,” he added.