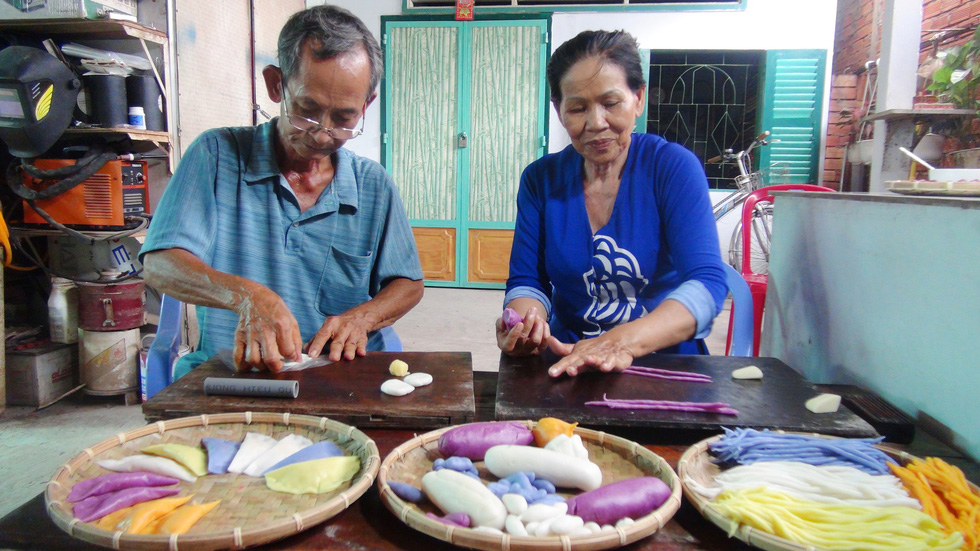 A senior married couple in the Mekong Delta city of Can Tho has silently contributed to preserving the craft of making Vietnamese traditional cakes, despite ups and downs and changes of times, for nearly half a century.

Duong Hoang Trung and his wife Truong Thi Chieu are known in Can Tho’s Binh Thuy District for their delicious ‘folk’ cakes.

The couple has run their traditional cake business for more than 40 years.

People in the district have been familiar with the lyrical calls of Chieu as she hawks her mobile cake cart around the streets every early morning.

Chieu and Trung’s cakes are made from sticky rice prepared from a special grain that is grown only once a year, crushed into flour, and mixed with juices from a variety of edible flowers, leaves, fruits, and vegetables to make eye-catching, organic colors.

The wife and husband are among few Vietnamese traditional makers who still make their products by hands in all steps, from soaking rice, kneading dough, to shaping the cakes.

“Rarely anyone now do as Trung and his wife do - staying loyal to the crafting method – which makes the cakes more addictive,” said Tuyet, a neighbor of the couple.

The man learned the craft from his mother in teenage years and became skilled as soon as he was 19.

He taught Chieu the skills when he first met her, and continued doing so after they wedded.

For more than 40 years, Chieu and Trung’s mouthwatering cakes are favored by generations of customers. They are usually sold out just after a few hours since Chieu takes her cart to the street.

“My mother still craves for the delicious taste of the cakes even though she is confined to bed by sickness,” said Trung, a Can Tho resident who lives some 20km from the couple’s area, but comes to buy their cakes once every few days.

Chieu and Trung’s workmanship is recognized by not only their customers but also local administrators.

Notably, Chieu was granted the title “Artisan of Southern Traditional Cakes” by the Ministry of Culture, Sports, and Tourism in 2014.

Below are photos of their traditional cakes: