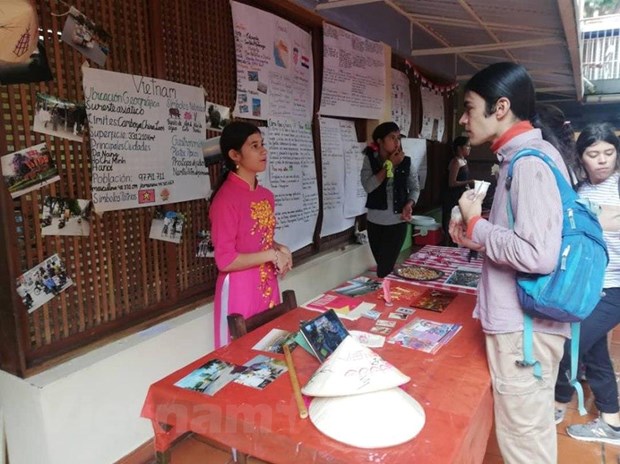 A Venezuelan elementary student is so in love with Vietnam that she chose the Southeast Asian country as the theme for her year-end project at fifth grade.

The mini exhibition where Angélica Colina Bastidas showcased the Vietnamese culture, language and cuisine to her peers and Venezuelan people was held in the capital of Caracas, the Vietnam News Agency reported on Thursday.

It was the final project that marked the fifth-grader’s completion of her elementary education, as she moves to middle school in the next academic year.

Bastidas, who the official Vietnamese news agency dubbed the “Venezuelan girl with a Vietnamese soul”, lived in the Vietnamese capital of Hanoi for three years, an experience that inspired her to introduce the country dear to her heart to her classmates.

By choosing Vietnam, Bastidas stood out from her classmates, most of whom chose a Latina country as the subject of their presentations.

The girl not only appeared onstage in ao dai, the traditional Vietnamese long gown, but also impressed her classmates and teachers with some common Vietnamese words and salutations in her presentation about the country.

The girl introduced her audience with Vietnam’s geographical attributes, famous attractions and touristic destinations, cuisine, especially dishes made of rice, and native vegetables unfamiliar to her Venezuelan classmates.

What interested her audience the most were details of how Vietnamese street food vendors let customers eat on the streets seated at low tables and chairs, as well as how these sellers can be easily found almost anywhere on the streets of Vietnam.

In addition to the information she found online, Bastidas also contacted a friend in Vietnam via the Internet for help with her presentation.

Thanks to this help, she learned about Vietnam’s education system and the country’s Lunar New Year, or Tet celebration, which were among the highlights of her presentation.