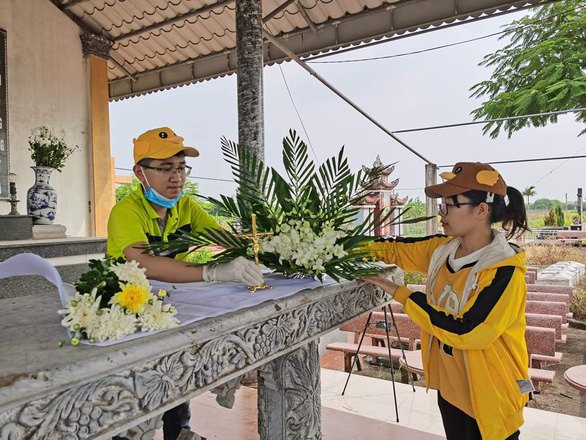 A young Vietnamese man, together with a group of friends, had been silently collecting and holding burial service for aborted fetuses in Hanoi before their act of kindness was discovered in a recent incident.

Bin Nguyen, whose name has been changed to protect his identity, 21, is a member of a group of young people who have been working on a self-assigned mission to give unborn babies proper funerals for a few years.

The group comes to private abortion clinics in the Vietnamese capital to collect aborted fetuses after 5:00 pm every day.

On Tuesday evening, Bin and another friend were on their way home from one such clinic when they were involved in a traffic collision with a female motorbike rider on Phung Hung Street in Ha Dong District at around 8:00 pm.

During a heated argument, the woman kicked Bin's motorbike, causing the fetal remains he had collected that day to be scattered on the ground, and threatened to summon others to the scene to "teach him a lesson".

It was not until police officers arrived that the situation was defused, and Bin’s act of kindness became publicly known.

“When the police officers learned that we had been collecting aborted fetuses, they protected us,” Bin told Tuoi Tre (Youth) newspaper.

Bin said that the policemen resolved the incident quickly and, together with local people, chipped in money to support his group's cause.

The officers also gave Bin and his friend a ride home to make sure they get home safely.

Bin told Tuoi Tre he has been collecting aborted fetuses for four years.

In addition to private abortion clinics, Bin said he and his team also try to look for abandoned newborns in garbage trucks and dumpsters.

Every month, the group brings the fetal remains to a parish in Bin's hometown in the south-central province of Nam Dinh for a group funeral.

The remains of aborted fetuses, stillborn babies, or premature newborns are ritually washed and wrapped in clean cloths before burial, he said.

According to Bin, the most difficult aspect of his work is that the group sometimes receive threats from people and is often prevented from collecting fetal remains by abortion clinics.

“Some people tell me that this job is only for nuns, those have no family or elderly people..., and that young people like us do not take it seriously,” Bin told Tuoi Tre.

“I just kept doing what I had set out to do, […] and eventually many young people began to notice our work and joined us,” he said.

Vietnam ranks first in Asia for abortion, and remains among the countries with the highest abortion rates in the world, the Ministry of Health reported in 2017, citing data from the World Health Organization.

Between 250,000 and 300,000 abortions are completed across Vietnam every year on average, according to official reports, with the actual number of abortions, including those conducted illegally at private facilities, estimated to be much higher.