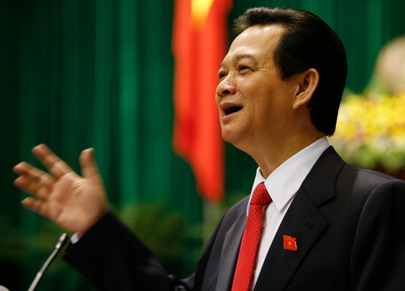 >> Cho Ray-Phnom Penh hospital inaugurated in Cambodia The event is expected to create a good opportunity for the two countries to review and evaluate their economic, investment and trade ties and discuss measures to further promote their cooperation.

Speaking at the event, PM Dung affirmed that the Vietnamese Government has worked out solutions to support foreign investors including Cambodians in Vietnam.

He also expressed his hope that Cambodian ministries and agencies will assist Vietnamese investors doing business in Cambodia. The two countries should maintain and develop dialogues between the two Governments’ agencies and expand their agreements on rubber tree plantation. Cambodian Prime Minister Hun Sen, who also attended the conference, called on Vietnamese enterprises to invest more in food and farm produce processing in Cambodia. He also said Cambodia will improve its business environment and always gives support to projects invested by Vietnamese businesses.

In the past years, Vietnamese investors have developed their projects mainly on agriculture, forestry, energy, finance, banking, insurance and telecommunication in Cambodia. They have so far invested more than US$3 billion in 127 projects in Cambodia, making Vietnam rank fifth among the foreign investors in the country. Vietnamese businesses have also spent $35 million in social security programs in Cambodia.

At the event, Vietnamese investors suggested that the two Governments should connect the two economies before 2015 and promulgate long-term and specific policies for projects along the common border to ensure and maintain border security. These investors also asked the two sides’ competent agencies to step up their work to launch the Agreement on Encouragement and Reciprocal Protection of Investments and sign an Anti-Double Taxation Agreement soon.