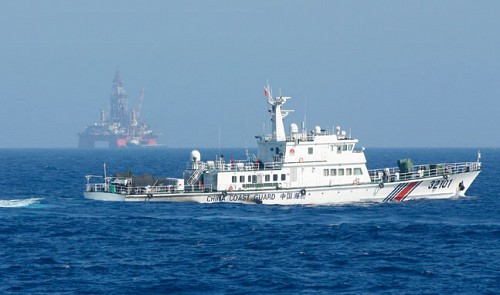 The Permanent Mission of Vietnam to the United Nations in Geneva, Switzerland on Wednesday sent to the organization a report in which the mission demanded that China withdraw its oil rig from Vietnamese waters immediately.

>> US hails Vietnam’s goodwill, criticizes China’s provocation over sea dispute>> Video: Chinese vessels attack Vietnamese ships in Vietnam's waters>> China deploys myriad fishing boats to guard illegal rig in Vietnam’s waters>> Attack from Chinese ship leaves 2 Vietnam fishermen badly injured The document also provided the UN with the latest developments related to the illegal operation of the Chinese drilling rig Haiyang Shiyou 981, which has been planted within Vietnam’s exclusive economic zone and continental shelf since May 2. The Permanent Mission of Vietnam also sent the report to the World Trade Organization, and other international organizations headquartered in Geneva. The report affirmed that China has seriously violated Vietnam’s sovereignty, sovereign rights and jurisdiction over its exclusive economic zone and continental shelf. China has also infringed the 1982 United Nations Convention on the Law of the Sea (UNCLOS), the 2002 Declaration on the Conduct of Parties in the East Vietnam Sea (DOC), and the high-ranking agreements between Vietnam and China, according to the document. Having full legal and historical evidence to prove its sovereign rights and jurisdiction over the country’s exclusive economic zone and continental shelf in accordance with the UNCLOS, Vietnam resolutely requests that China move its rig and escort ships out of the Vietnamese waters at once, the Permanent Mission said in the report. The Vietnamese government calls on other countries to voice criticism against China for its wrongful act, request Beijing to withdraw its rig from the Vietnamese waters, and respect the rights and interests of all coastal countries pursuant to the UNCLOS. By planting the rig in the waters, China has also placed a negative impact on maritime safety and security in the East Vietnam Sea, directly threatening peace, stability in the region and the world in general. The Chinese drilling rig is located at 15°29’58’’ North latitude and 111°12’06’’ East longitude in the East Vietnam Sea, which lies well within Vietnam’s exclusive economic zone and continental shelf, the Vietnamese Ministry of Foreign Affairs insisted.