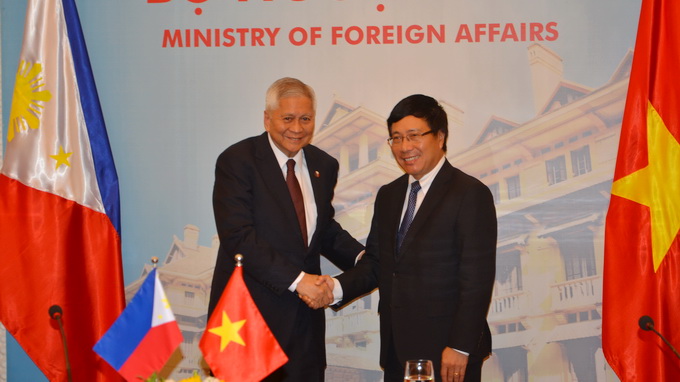 Seniors officials of Vietnam and the Philippines have consented to take bilateral relations to the strategic partnership level later this year.

Vietnam’s Deputy Prime Minister and Foreign Minister Pham Binh Minh and Filipino Secretary of Foreign Affairs Albert Del Rosario made the agreement after the eighth meeting of the Vietnam-Philippines Bilateral Cooperation Committee in Hanoi on Wednesday.

The strategic partnership is expected to be signed between the two countries on the sidelines of the Asia-Pacific Economic Cooperation (APEC) Summit that will take place in Manila in November.

At the Hanoi meeting, the two sides made a comprehensive review of the bilateral relationship since the previous meeting held in Manila in October 2013 and the implementation of the Vietnam-Philippines action plan for 2011-16.

Speaking at a press conference after the event, Deputy PM Minh said the two countries have reached a high level of political trust via the regular exchange of visits while economic, trade, defense and security ties have made substantial progress.

He also said the host and guest have agreed to increase two-way trade to US$3 billion or higher in 2016.

The two sides pledged to accelerate the signing of a protocol supplementing the bilateral rice trade agreement for 2014-16 that aims to maintain Vietnam’s rice supply to the Philippines to ensure food security for the country, the Vietnamese official said.

Both sides highly appreciated the effective cooperation between the two nations in the field of defense and security.

Secretary Rosario said that lifting their bilateral ties to a strategic partnership level will help strengthen cooperation to benefit both countries.

He expressed his pleasure at the development of relations between the navies and defense forces of each country in the fields of search and rescue at sea, humanitarian support and disaster relief.

Regarding the sovereignty disputes in the East Vietnam Sea, Deputy PM Minh and his guest reiterated the significance of ensuring peace, stability, security, navigation and aviation freedom and safety in the sea area.

The two sides shared the view that maritime disputes should be settled in line with international law, including the 1982 United Nations Convention on the Law of the Sea, and the Declaration on the Conduct of Parties in the East Vietnam Sea, which was signed between China and ASEAN in 2002.

All the related parties should accelerate the building of a code of conduct for the East Vietnam Sea, the two officials agreed.

In talking with Tuoi Tre (Youth) newspaper about Vietnam-Philippines ties, Professor Zach Abuza, from the U.S. National War College, said that the boosting of relations between countries having common interests in the East Vietnam Sea, such as Vietnam and the Philippines, is necessary.

Dr. Jonathan D. London, a professor in the Department of Asian and International Studies and a core member of the Southeast Asia Research Center at the City University of Hong Kong, said the future strategic partnership between the two countries will help address a series of issues in the field of economics and defense, and will also benefit other bilateral cooperation in the coming time.

Many other nations will welcome the positive move in the ties between Vietnam and the Philippines, Prof. London said.

US to further support Vietnam in climate change response

The U.S. will boost its cooperation and support for developing countries, including Vietnam, in climate change response