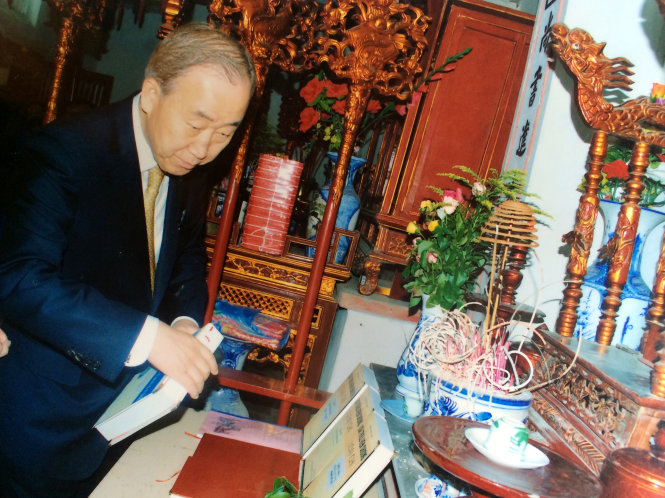 Insiders who were directly and indirectly involved in an unannounced visit paid by UN Secretary General Ban Ki-moon to a house of worship in northern Vietnam in May have said the UN chief came to the place to know about his ancestors.

On May 23, Secretary General Ban visited the house of worship of the Phan Huy family in the rural part of the capital of Hanoi, Phan Huy Thanh, a member of the family, told Tuoi Tre (Youth) newspaper on Saturday.

Thanh revealed to Tuoi Tre that after the visit, historian Phan Huy Le, who is another member of the family, and the interpreter who accompanied the UN chief during that visit confirmed to him that Secretary General Ban had said his ancestors once told him that he is a descendant of the Phan Huy family in Vietnam.

Thanh, of 16th generation of the Phan Huy family, has been assigned to look after the house of worship in Sai Son Commune, Quoc Oai District for a long time.

He was one of 18 members of the Phan Huy family who greeted a delegation led by the 71-year-old UN chief and his wife and guided them throughout the visit to the house.

During the 45-minute trip, Secretary General Ban burned incense, wrote in the guestbook of the house, posed for some pictures with the Vietnamese people there, and then left, Thanh recounted.

He also picked some children, talked and shook hands with some people in the family, saying “cam on” (thank you) in Vietnamese, Thanh told Tuoi Tre.

When asked if the UN chief mentioned the reason for the visit, Thanh recalled Ban neither said anything about it nor wanted to see the family’s genealogy through the interpreter.

He just wrote some words in the guestbook, stating that he was happy to visit the place.

“I am deeply humbled to visit and pay my deep respect to this house of worship of 潘輝注 [Phan Huy Chu] and other 潘 [Phan] family members,” Secretary General Ban’s writing reads.

“Thank you for preserving this house of worship. As one of 潘 [Phan] family, now serving as Secretary General of UN, I commit myself that I will try to follow the teachings of ancestors,” according to the writing.

The writing of the UN chief and its Vietnamese translation. Photo: Tuoi Tre

He wrote down his name and position at the UN in English, Chinese, and Korean, with his name translated into Vietnamese as Phan Co Van.

Two weeks before the visit, someone informed Phan Huy Giam, a member of the family who is also assigned to be the caretaker of the house, that a delegation of the United Nations would come to the place, Thanh said.

On May 21 and 22, a number of police officers from the Hanoi police department worked with Quoc Oai authorities on preparation for the visit.

Thanh said as he knew nothing more about that, he contacted the person who had notified Giam of the visit, on May 22 evening and was told that the delegation would be led by UN Secretary General Ban Ki-moon.

He then made a phone call to Phan Huy Huan, the head of the Phan Huy family now, and asked him to be at the house early next morning.

Previously, historian Phan Huy Le told Tuoi Tre he did not join the delegation for a personal reason, but had gifted four books written by Phan Huy Chu, a prominent member of the family that included many famous intellectuals and scholars back in the 18th century.

Le said he has asked a Korean professor who is an expert on genealogy to trace the origin of the UN chief so that they can then compare it with the Phan Huy family tree.

A representative of the United Nations Development Program (UNDP) in Vietnam told Tuoi Tre that Secretary General Ban left a meeting at the Vietnamese National Assembly after giving a speech there on May 23 for personal matters.

"Only a few bodyguards accompanied him at that time, and everyone in UNDP knew that it was a private matter, as he did not want any reporters to follow," he said.

The Vietnamese Ministry of Foreign Affairs said it was unaware of the visit, confirming that this was a private affair of the UN chief.