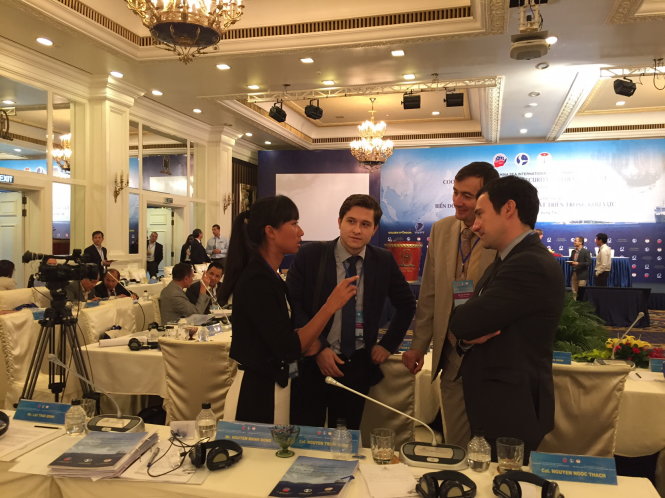 The “historical sovereignty” China claims over the East Vietnam Sea is baseless and thus Beijing should comply with international law, according to a U.S. expert.

Dr. Patrick M. Cronin, senior director of the Asia-Pacific Security Program at the Center for a New American Security, offered the remark when talking to Tuoi Tre (Youth) newspaper, rejecting the argument of a Chinese scholar at an international conference on East Vietnam Sea issues that concluded in the southern Vietnamese city of Vung Tau on Tuesday.

The Chinese scholar in question is Dr. Nong Hong, director of a research center under an institute for East Vietnam Sea studies in China.

In her speech at the event, Dr. Nong said that China’s “historical sovereignty” under the so-called “nine-dash line” is more meaningful in terms of international law than the concept of “exclusive economic zone” adopted by other countries in the East Vietnam Sea.

The line was unilaterally proclaimed by China to illegally claim sovereignty over about 80 percent of the East Vietnam Sea, including Vietnam’s Hoang Sa (Paracel) and Truong Sa (Spratly) archipelagoes.

The Philippines, Taiwan, Brunei, and Malaysia are the other claimants to the sea.

The Chinese academic added that “historical sovereignty” remains within the scope of international law although the West does not approve of it, she told the conference.

Her words were out of place and were not related to what China has been doing in the East Vietnam Sea, Dr. Cronin said.

The American expert pointed out that Beijing is taking advantage of its ambiguous sovereignty claims to turn down other countries’.

An important issue here is that China must comply with international treaties to which it is party, Dr. Cronin said.

On the first day of the two-day conference, Shen Dingli, an associate dean at the Institute of International Studies under Fudan University, also said that 200-nautical-mile exclusive economic zones, as stipulated in the United Nations Convention on the Law of the Sea, simply make sense in terms of economic rights, not sovereignty.

Meanwhile, Bill Hayton, an expert at the UK’s Royal International Issues Institute, said that recent studies have subverted China’s claim of sovereignty over the East Vietnam Sea that is based on what the Chinese consider “historical evidence” in the first half of the 20th century.

China’s “historical evidence” does not have any credibility, Hayton said.

He also affirmed that China only began paying attention to the East Vietnam Sea in the 20th century and there is no proof proving that the Chinese came to Vietnam’s Hoang Sa before 1909.

Most of China’s studies on the East Vietnam Sea have been grounded on a small volume of materials published in the 1970s and 1980s, so they only contain information on the maritime affairs of those periods, Hayton added.

He also pointed out that those who drafted China’s “historical sovereignty” statements are not historians.