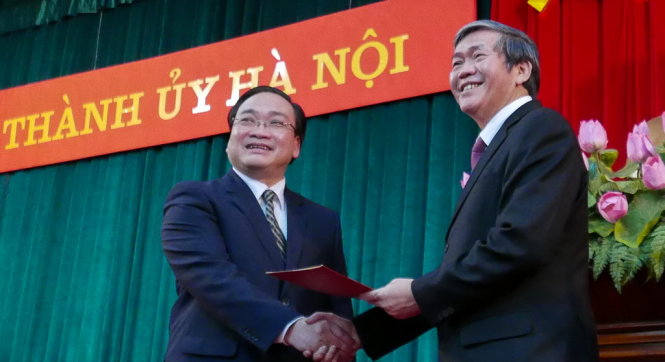 Vietnam’s Deputy Prime Minister Hoang Trung Hai has been appointed Secretary of the Hanoi Party Committee, as the committee convened a meeting in the capital city on Friday morning.

The appointment decision was made by Vietnam’s Politburo and was announced at the meeting by Pham Minh Chinh, Politburo member and head of the Party Central Committee's Organizational Commission.

The decision document was handed over to Hai by Dinh The Huynh , Politburo member, standing member of the Secretariat, and Secretary of the Party Central Committee.

Party Committee is the leading organ of the Communist Party of Vietnam of each of the country’s cities.

Speaking at the meeting, Hai said he considers the appointment both an honor and heavy responsibility.

“As Hanoi is the national hub of politics and administrative and a major center of culture, science, education, economics and international trades, I acknowledge the challenging responsibilities now on the shoulders of myself and the Hanoi Party Committee and its administration,” he said.

Hoang Trung Hai is also among 200 members of the 12th Party Central Committee, a powerful panel within the Communist Party of Vietnam that was named by the 12th National Party Congress late last month.

The 57-year-old politician was born in the northern province of Thai Binh, some 100km from Hanoi. He graduated from the Hanoi University of Science and Technology and has a master’s degree.

Hai started his career as an engineer, having been the head of the technical department and deputy operational engineer in chief of the Pha Lai power plant in the northern province of Hai Duong.

In the early 1990s, Hai moved to work at a major power firm in Hanoi, and became head of general administration at the erstwhile Ministry of Power in 1993.

He then left for a MBA course at Ireland’s University of Dublin, and was appointed head of the supervision board of the Vietnam Electricity (EVN) upon his return in September 1995.

He was appointed Deputy Minister of Industry (now the Ministry of Industry and Trade) in July 1997.

From April 1998 to August 200, he was the general director of EVN, the country’s power utility.

From August 2000 to July 2002, he returned to the Ministry of Industry as deputy minister. He became Minister of Industry in August 2002.

In August 2007, he was appointed Deputy Prime Minister.

He was member of the Party Central Committee in the 9th, 10th and 11th tenures, and delegate of the 8th, 11th and 13th lawmaking National Assembly.