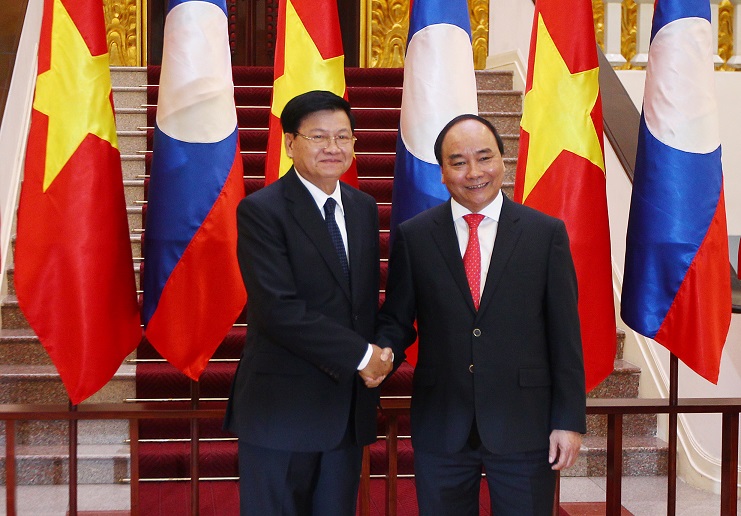 The Vietnamese and Laotian heads of government have agreed that the relationship between the two nations is invaluable and needs to be preserved, developed and passed on to future generations.

Vietnamese Prime Minister Nguyen Xuan Phuc held talks with his Laotian counterpart Thongloun Sisoulith in Hanoi on Sunday morning, part of the latter’s official visit to Vietnam from May 15 to 17.

The two heads of government expressed their commitment to preserve and develop the loyal and united relationship between the two countries.

Focus will be directed to the realization of agreements signed by Vietnamese and Laotian leaders in terms of boosting ties in politics, diplomacy, security and national defense.

The two parties will carry out the collaboration protocol in defense and security for the 2016-20 period, and establish a stable, peaceful and friendly borderline; a foundation for sustainable bilateral cooperation in the area.

Coordination is also encouraged among leaders and authorities at a local level in order to provide mutual support for socio-economic development, ensuring social order and safety, and dealing with emerging issues in a timely manner.

Regarding the cooperation in economic matters, trade and investment, the two parties reached a consensus on effectively carrying out several agreements signed in 2015.

According to PM Sisoulith, Laos will provide favorable conditions for Vietnamese enterprises to invest and carry out their business operations in the country, striving for a 20 percent growth rate in bilateral turnover this year.

The two premiers also agreed on enhancing the quality of training and human resource development, preparing for and successfully organizing a ‘Vietnamese Culture Week’ in Laos in 2016, and establishing the center for Vietnamese culture in Laos and President Ho Chi Minh Park in Vientiane.

PM Phuc praised Laos’ chairmanship of ASEAN in 2016, saying that Vietnam would always assist Laos in fulfilling its responsibility.

The premier also hoped for the early establishment of a Code of Conduct for the sea area between ASEAN member nations.

In addition, the two leaders promised to continue working together and with other nations and international organizations for the efficient management of water resources in the Mekong River.

President Quang considered the visit of the Laotian official an indication of a strong friendship between the two Parties, governments, and peoples.

Sisoulith is scheduled to have a meeting with General Secretary of the Communist Party of Vietnam Nguyen Phu Trong and later head to Ho Chi Minh City on Monday.