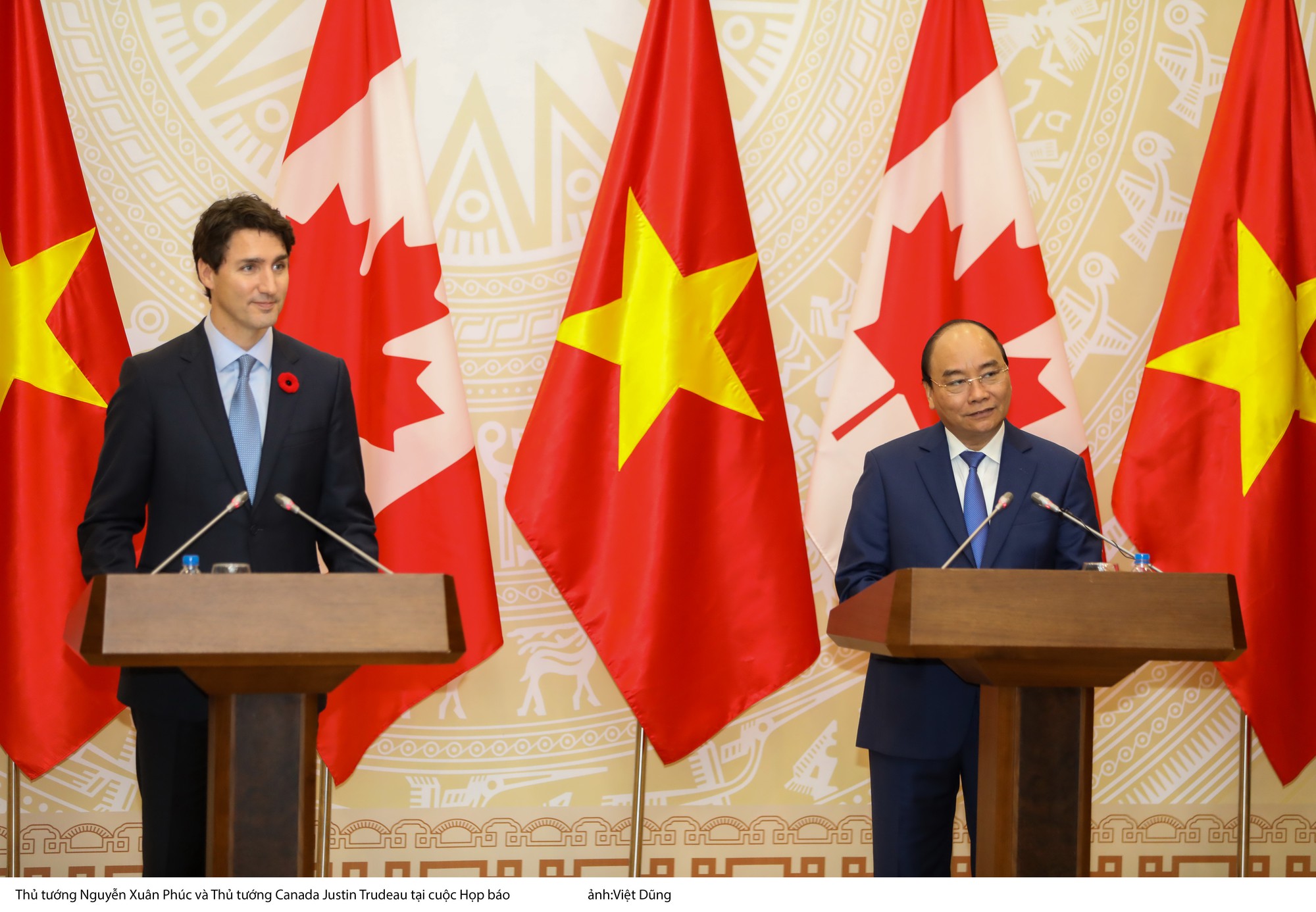 More than 40 years after late Canadian PM Pierre Trudeau established diplomatic ties with Vietnam, his son Justin Trudeau is taking bilateral relations to a new height by opening the doors for a comprehensive partnership.

An agreement to establish the framework for a comprehensive partnership between Vietnam and Canada was reached on Wednesday during talks between Trudeau and his Vietnamese counterpart Nguyen Xuan Phuc in Hanoi.

The Canadian head of government is in Vietnam for an official state visit and for the upcoming Asia-Pacific Economic Cooperation (APEC) leaders’ summit hosted by Da Nang City this weekend.

Co-chairing a press conference with his Canadian counterpart following Wednesday’s talks, PM Phuc stressed that the establishment of the comprehensive partnership would help build momentum for cooperative ties, especially considering the two nations are now “sharing more common interests bilaterally as well as in regional and international affairs.”

Both leaders took the opportunity to express delight at the positive development of bilateral ties across many fields over the past years.

Through this important milestone, Vietnam and Canada also seek to deepen coordination at international and regional forums such as APEC and Francophonie, as well as in other issues of common interest.

Sharing that view, PM Trudeau said the Canada-Vietnam comprehensive partnership will be an important legal framework for the two countries to continue fostering existing cooperative ties in all fields.

Trudeau pledged to provide support to Vietnam in the country’s efforts to battle climate change and build sustainable development through the enactment of the United Nations’ 2030 Agenda for Sustainable Development.

Canada is also willing to facilitate more student exchange programs between the two countries, he said.

Diverging from diplomatic exchanges, PM Trudeau recalled backpacking through Vietnam in 1995 as a young man and reflected upon the changes he has observed in the country over the past 22 years.

The Canadian leader remarked on how bilateral relations have developed significantly since his late father Pierre Trudeau, who served as Prime Minister of Canada between 1968 and 1984, established diplomatic ties with Vietnam in 1973.

Since then, the countries have worked closely to advance common interests, international cooperation, and trade exchanges, he said.

Trudeau added that it was his pleasure to uphold the long tradition of cooperation between Vietnam and Canada by signing the agreement.

PM Trudeau touched down in Hanoi on Wednesday morning, commencing his official trip to the Southeast Asian nation on November 8 and 9.

A welcome ceremony hosted by Vietnamese PM Phuc was held at the Presidential Palace on the afternoon of the same day, followed by joint talks and a press briefing.

After his agenda in Hanoi, the Canadian premier headed Ho Chi Minh City on Thursday morning for scheduled meetings with Vietnamese business leaders in the morning and an armchair discussion at Ton Duc Thang University in the afternoon.

After the conclusion of his state visit, Trudeau will travel to Da Nang to attend the APEC Economic Leaders’ Meeting, where he is expected to promote Canada as a partner of choice for trade and investment in the region in a bid to deepen economic cooperation with APEC economies.

Following his trip to Vietnam, PM Trudeau will travel to the Philippines to attend the 31st Association of Southeast Asian Nations (ASEAN) Summit in Manila.