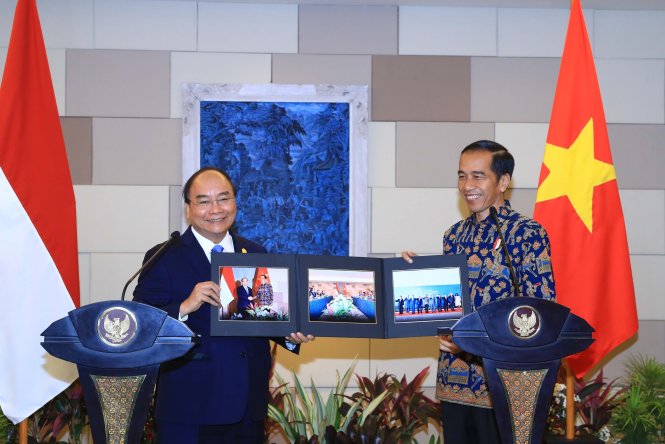 Vietnamese Prime Minister Nguyen Xuan Phuc and Indonesian President Joko Widodo have stressed the need to create breakthroughs in bilateral economic cooperation, making it the main pillar of the countries’ strategic partnership during their talks in Bali on Friday.

They agreed to raise bilateral trade to US$10 billion by facilitating market access for goods from the other country, reducing technical barriers, streamlining customs procedures and cooperating closely in product origin inspection and quarantine.

The two sides will create mechanisms for dialogues among businesses as well as between businesses and governments to swiftly erase bottlenecks hindering investment and business activities.

The leaders agreed to review the 1990 agreement on economic, commercial and technical cooperation and considered making the Joint Trade and Economic Commission the leading mechanism in promoting bilateral economic ties.

The two leaders stressed the need to further strengthen maritime cooperation and agreed to assign competent agencies to study the establishment of a marine cooperation mechanism to discuss related cooperation, especially in fishing, seafood processing, and building a favorable framework for the safe, sustainable and legal operation of Vietnamese and Indonesian fishermen.

PM Phuc thanked the Indonesian government for the repatriation of 177 Vietnamese fishermen arrested and detained in Indonesia for fishing violations, proposing that both sides regularly exchange information and handle this issue in a humanitarian spirit and in accordance with the good relations between two countries.

The two sides agreed to accelerate the establishment of a hotline on fishing and maritime issues, while actively coordinating to implement the joint communiqué on voluntary international cooperation against illegal, unreported and unregulated (IUU) fishing signed last month.

The two leaders welcomed the progress in the demarcation of exclusive economic zones (EEZ) between the two countries after 11 rounds of negotiations, and consented to work harder for a solution suitable for both sides and in line with international law.

They acknowledged new advancements in cooperation in agriculture, education-training and connectivity, and saw eye to eye on the need to further expand collaboration in potential areas such as training laborers to meet demands of the digital economy, strengthening tourism cooperation, and studying the opening of direct flights connecting major and tourist cities of the two countries.

They shared their visions on and committed to increasing cooperation and coordination at international forums, especially within frameworks of the Association of Southeast Asian Nations (ASEAN), the Asia-Pacific Economic Cooperation (APEC), and the United Nations (UN).

They affirmed to closely cooperate and work together with other ASEAN member states to build an ASEAN Community of unity, self-reliance and inclusive development, promote the bloc’s central role in the region, and actively participate in the process of shaping regional cooperation initiatives.

President Widodo pledged commitment to supporting Vietnam when it undertakes the ASEAN chairmanship in 2020.

After the talks, PM Phuc and President Widodo held a joint international press conference, announcing outcomes of their talks.

Phuc was in Indonesia from October 11 to 12 to attend the ASEAN Leaders’ Gathering on the occasion of the annual meetings of the International Monetary Fund (IMF) and the World Bank (WB), as well as to pay an official visit to Indonesia on the invitation of President Widodo.

The Vietnamese leader arrived in Hanoi on Friday afternoon.