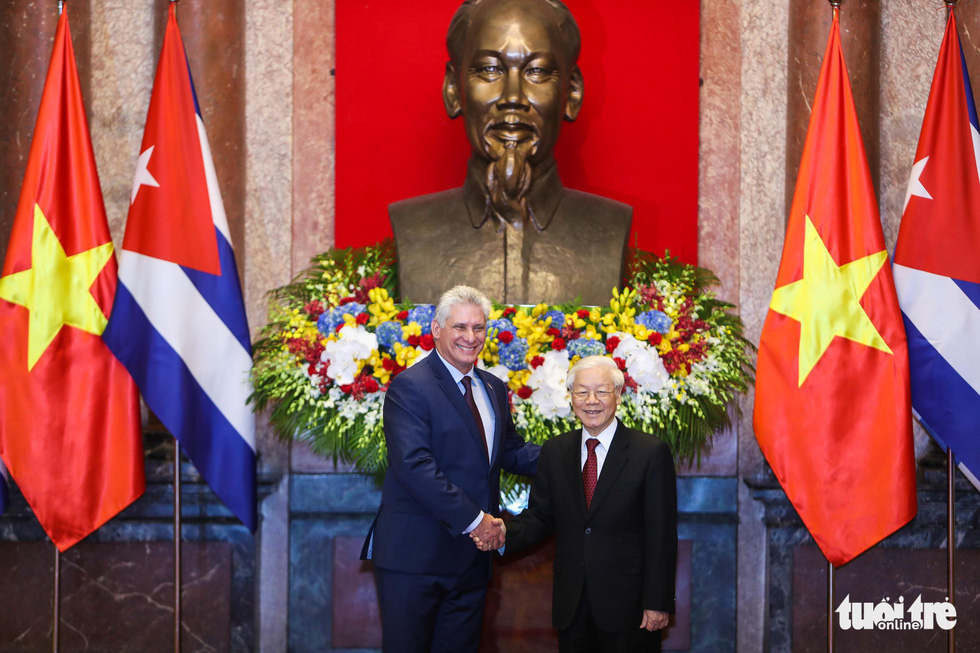 President of the Council of State and Council of Ministers of Cuba Miguel Mario Diaz-Canel and his spouse attended a state welcome ceremony in Hanoi on Friday morning as part of their official friendly visit to Vietnam.

The Cuban leader is visiting Vietnam from November 8 to 10 at the invitation of the state president and prime minister of Vietnam.

The visit is President Diaz-Canel’s first official trip to Vietnam since he took office in April.

President Diaz-Canel is scheduled to arrive in Ho Chi Minh City on Saturday, where he will have meetings with city leaders and visit historical sites.

The Cuban leader’s Vietnam trip is a step to continue bolstering the special relations between the friendly countries, and reiterates Vietnam’s consistent policy of developing friendship, solidarity, mutual trust, and comprehensive cooperation with Cuba, the official Vietnam News Agency reports.

Vietnam is one of Cuba’s ten biggest trade partners globally and its second-biggest trade partner in Asia.  Vietnam exports rice, coal, chemicals, garment-textiles and computers to Cuba while importing pharmaceutical products from the Caribbean country.

Two-way trade averaged US$170 million yearly between 2012 and 2014 before gradually climbing to $230 million in 2017, with Vietnam enjoying a trade surplus.

The welcome ceremony is the first to be made for a foreign head of state by President Trong since he was elected Vietnam’s head of state in October to succeed late State President Tran Dai Quang, who died in September.