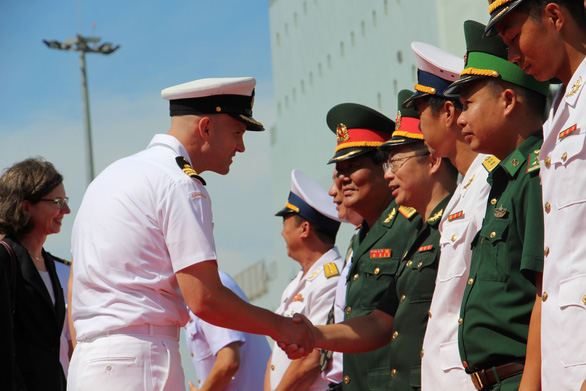 Two vessels of the Royal Canadian Navy arrived in the south-central Vietnamese province of Khanh Hoa on Monday, commencing their four-day visit to the Southeast Asian country.

The crew members were welcomed by representatives of the Vietnamese navy’s 4th Regional Command and Khanh Hoa Department of External Relations.

This is an opportunity for the Canadian naval officers to interact with the local community and express their commitment to tighten the two countries’ partnership, said Commander Jacob French, commanding officer of HMCS Regina.

The highlight of the visit will be the joint activities between the Canadian officers and their Vietnamese counterparts, which are aimed at expanding and strengthening Canada’s relationships in the Asia-Pacific, the commander elaborated.

According to Canadian Ambassador to Vietnam Deborah Paul, this is the first time a ship of the Royal Canadian Navy has visited Cam Ranh Seaport.

The trip symbolizes the common interests of the two countries for regional security, and contributes to the enhancement of bilateral ties, the diplomat added.

It is also part of an exchange program of the Royal Canadian Navy in the Asia-Pacific, which is aimed at cementing the navy’s ties with its partners in the region via joint activities.

It is one of the most advanced warships in the world, equipped with modern anti-submarine weapons, floating armories, and air-defense radar systems.