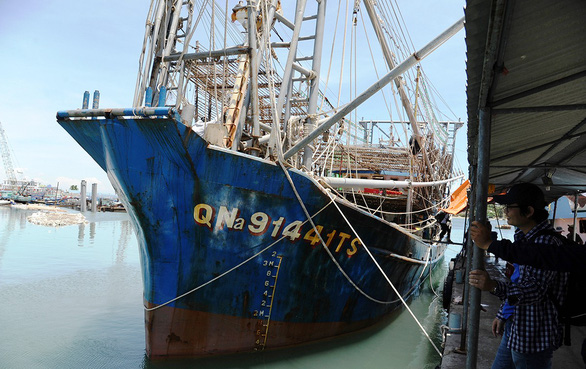 China should 'educate' its crew members to refrain from such actions as driving away Vietnamese fishing boats working in the waters of the Hoang Sa (Paracel) archipelago in the East Vietnam Sea, following several cases that happened in the recent past, Vietnam’s foreign ministry spokesperson said on Thursday.

Reports that some Vietnamese fishing boats operating in Hoang Sa were driven away and had their assets and fishing tools confiscated by China’s authorized vessels were among issues raised during the regular meeting of the Vietnamese foreign ministry in Hanoi yesterday.

“The aforementioned actions of China’s authorized vessels violated Vietnam’s sovereignty over Hoang Sa, infringed international law and the Vietnam-China agreement on basic principles guiding the settlement of sea-related issues, and threatened the safety and assets of Vietnamese fishermen who were working normally in this maritime area,” Hang said.

The spokeswoman underlined that Vietnam resolutely opposes the above-mentioned actions of the Chinese side and demands that China strictly deal with the Chinese crew members and authorized vessels that committed the violations.

In the latest incident on June 2, a Vietnamese boat anchored around 22 nautical miles from Tri Ton Island in Hoang Sa was approached by a Chinese vessel. One man from the Chinese boat then told the Vietnamese ship to leave as they were not “allowed to fish in Chinese waters,” according to Tran Van Nhan, owner of the Vietnamese boat.

Some armed Chinese crew members then stormed into Nhan’s boat and took away some 2.5 metric tons of squid worth more than VND250 million (US$10,706).