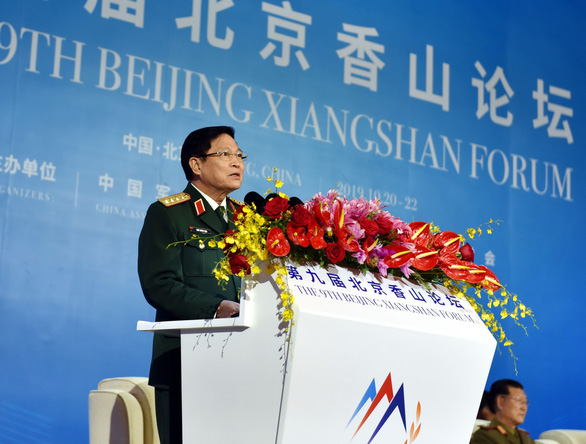 Vietnam’s Minister of National Defense, General Ngo Xuan Lich, addressed the situation in the East Vietnam Sea during his speech at the 9th Beijing Xiangshan Forum in Beijing on Monday.

A delegation of high-ranking Vietnamese military officials led by General Lich has been taking part in the event, which took place from October 20 to 22 in the Chinese capital, according to the Vietnam News Agency.

The forum, themed ‘Maintaining International Order and Promoting Peace in the Asia-Pacific,’ attracts hundreds of defense and military leaders, along with experts from many countries and organizations around the world.

General Lich delivered a speech at a plenary session on security risk management in Asia-Pacific on Monday, during which he called on all countries to uphold the rule of law and mutual respect in international relations as well as in the settlement of disputes to manage security risks.

The defense minister mentioned the situation in the East Vietnam Sea, stating that the maritime area has been facing numerous security risks due to various factors, including competition among powers, sovereignty disputes, and non-traditional security issues.

He reiterated Vietnam’s stance of maintaining the freedom of passage, security, and safety of navigation and aviation in the area in accordance with international law.

Relevant parties should respect legitimate interests of each country in the spirit of partnership and responsibility towards the community, Lich continued.

Together with other countries, Vietnam will strive to foster cooperation so as to build the East Vietnam Sea into a maritime area of peace, stability, and development for the mutual benefit of all countries in the region and the world.

In his speech, the official also affirmed that the security and stability of China and ASEAN member countries are inseparable.

Both sides have always respected and bolstered cooperation in all spheres, with defense and security being important pillars, he added.

The Beijing Xiangshan Forum, originally the Xiangshan Forum, was initiated by the China Association of Military Science (CAMS) in 2006 as an unofficial platform for Asia-Pacific security dialogue, according to the forum’s official website.

The forum underwent a name change in 2018 and has developed into a high-level security and defense forum in Asia-Pacific, the website said.