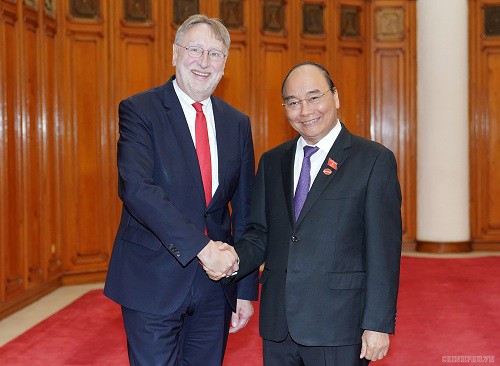 The European Parliament (EP) may ratify the Vietnam-EU Free Trade Agreement (EVFTA) and Investment Protection Agreement (IPA) next year, Bernd Lange, chair of the EP Committee on International Trade, stated during a talk with Prime Minister Nguyen Xuan Phuc in Hanoi on Thursday.

During the meeting, which is part of Chairman Lange’s visit to the Southeast Asian county, PM Phuc thanked the EU official for his efforts to push for the signing of the EVFTA and IPA, according to the Vietnam Government Portal.

Vietnam and the EU need to increase the exchange of high-level visits, maintain dialogue and cooperation mechanisms, as well as promptly solve existing problems in bilateral ties, the premier said, adding that both sides are poised to celebrate the 30th anniversary of bilateral diplomatic ties next year.

He praised the significance of the EVFTA and IPA in the Vietnam-EU relationship, as well as the promotion of open and transparent economic connectivity between both parties.

The enhancement of cooperation between the EU and Vietnam, as well as ASEAN, will contribute to peace and prosperity in the region and the world, the premier remarked.

Replying to his host, Lange stated that his ongoing visit aims to discuss with Vietnamese authorities to better understand the situation and how the nation plans to fulfill its commitments.

The European Parliament is expected to ratify the EVFTA and IPA in February 2020, he added.

Vietnam and the EU signed the trade and investment agreements in Hanoi on June 30, making the former the second ASEAN nation to sign such accords with the EU.

Once the EVFTA takes effect, the EU will immediately eliminate 85.6 percent of tariff lines now imported from Vietnam, and 99.2 percent after seven years.

Lange took the occasion to reaffirm that the EU totally supports Vietnam’s stance in the East Vietnam Sea.

He also expressed the EU’s wish to coordinate closely with Vietnam, especially when the Southeast Asian country takes over the United Nations Security Council non-permanent membership and ASEAN Chairmanship in 2020.