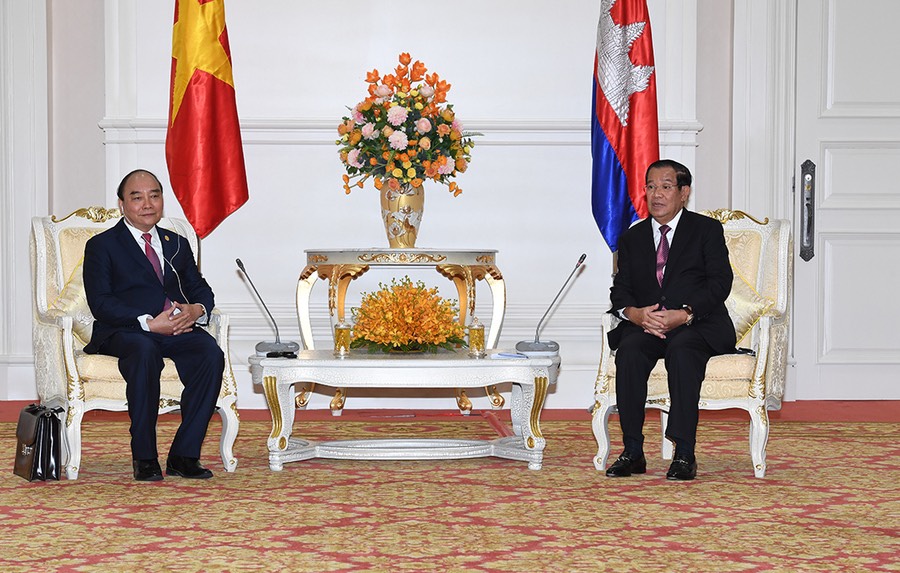 Vietnam's State President Nguyen Xuan Phuc joined talks with King of Cambodia Norodom Sihamoni and Cambodian Prime Minister Hun Sen in Phnom Penh on Tuesday, as part of his state visit to the neighboring country on Tuesday and Wednesday.

This trip, marking Phuc’s first official visit to Cambodia in his role as state president, is among a series of activities to celebrate the Vietnam - Cambodia Year of Friendship and the 55th anniversary of the establishment of diplomatic relations between the two countries.

The meeting between President Phuc and King Sihamoni followed a welcome ceremony on Tuesday morning.

During the dialogue, the Cambodian leader believed that the visit will make important contributions to the two nations’ neighborliness, traditional friendship, comprehensive cooperation, and long-term sustainability.

The king congratulated Vietnam on its achievements in both internal and external affairs, which have elevated the country’s position in the region and the world.

Both sides vowed to give the top priority to fostering the two countries’ bilateral relationship.

They also expressed their delight at the activities to be held during the 2022 Vietnam - Cambodia Year of Friendship on the occasion of the 55th anniversary of diplomatic ties.

During his talks with PM Hun Sen, which took place later the same day, President Phuc congratulated Cambodia over the great accomplishments in socio-economic development and COVID-19 prevention and control.

The two leaders expressed their appreciation for the comprehensive development of the Vietnam-Cambodia ties over the past 55 years.

Despite the COVID-19 pandemic, both nations have made efforts to maintain mutual visits and high-level discussions as well as optimize bilateral cooperative mechanisms.

The leaders agreed on further deepening cooperation in security and defense, and promoting connectivity between the two economies, especially in transport, telecoms, trade, investment, finance and banking, agriculture, tourism, and energy.

The two sides will speed up negotiations on mutual recognition of each other’s vaccine passports.

They reached consensus on the implementation of border treaties and agreements.