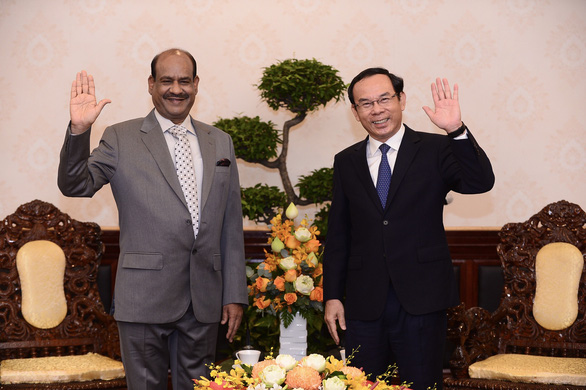 Secretary of the Ho Chi Minh City Party Committee Nguyen Van Nen and Speaker of the Indian Lok Sabha (the lower house) Om Birla have shared their visions for economic recovery and development after the COVID-19 pandemic in their recent meeting.

At the reception hosted on Thursday for Birla, who led an Indian parliament delegation on a three-day visit to Vietnam starting Tuesday, Nen highly appreciated and called for further boosting the comprehensive strategic cooperation ties between the two countries.

The visit was made at the invitation of Vietnam’s National Assembly Chairman Vuong Dinh Hue, in the context that Vietnam and Ho Chi Minh City in particular have been organizing diverse activities marking the 50th anniversary of the diplomatic ties between Vietnam and India.

Briefing the guest on COVID-19 prevention and control in Ho Chi Minh City and Vietnam in general, Nen thanked India for its assistance to the city in the fight against the pandemic.

The support, including medical masks, drugs and medical equipment, and technology transfer, has helped the city keep the pandemic at bay and spur economic restoration, he said.

Ho Chi Minh City, which is in the process of recovery in various fields including trade, investment, tourism, technology, and education and training, has still a lot of room to receive investment from Indian investors, Nen said.

India and Vietnam have the same vision of sustainable and inclusive development, Speaker Birla said, adding that he hoped bilateral ties would continue to expand, especially in technology.

The two countries should also promote cooperation in tourism development, as both India and Vietnam have great potential in this field with many attractive destinations in each country, the guest suggested.

He expressed his belief that the Indian community in Ho Chi Minh City will contribute to act as a bridge for cooperation and development between the two nations.

During the high-level meetings, both the hosts and guest pledged to step up cooperation in all fields, including trade and investment, technology transfer, energy, vaccine production, education and training, and security and defense.

Hue and Birla witnessed the announcement of Vietnamese carrier Vietjet’s new direct flight routes to India, and the signing of an agreement to build a joint venture between Vietnam’s Galaxy Digital Holdings and India’s Tech Mahindra Limited.

While in Hanoi, Birla and other Indian parliamentarians visited and laid a wreath at the President Ho Chi Minh Mausoleum, and also called on Tran Quoc Pagoda.