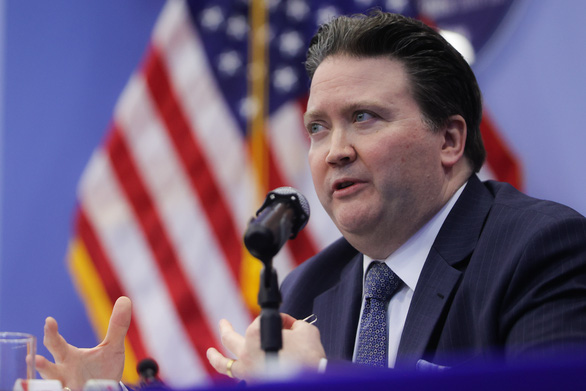 Vietnam - US comprehensive ties should be boosted to strategic partnership: US ambassador

The U.S. and Vietnam are constantly promoting their comprehensive partnership in diverse fields with a shared commitment to peace and prosperity, and the bilateral ties should be upgraded to a strategic level to match the current cooperation, U.S. Ambassador to Vietnam Marc E. Knapper said.

The ambassador made the statement in an exclusive interview with the Vietnam News Agency recently, ahead of Prime Minister Pham Chinh’s week-long trip to the U.S. to attend an ASEAN - U.S. special summit in Washington, D.C. from May 11 to 17.

“Our partnership is strong, and the breadth and depth of cooperation between our two great countries is making our partnership even stronger,” Ambassador Knapper was quoted as saying.

He emphasized that the U.S. and a strong and independent Vietnam are working together in diverse areas like trade, development, education, healthcare, energy, and security, with a shared commitment to peace and prosperity.

Talking about his expectations of the future relations between the two countries, the ambassador commented that “the U.S. - Vietnam partnership has never been better and, as the prime minister has said, Vietnam has never enjoyed higher international prestige.”

Moving from a history of conflict and division, both nations have gradually built up a comprehensive partnership that covers political, security, economic, and people-to-people ties, as well as efforts to address war legacies, Knapper said.

“It is a partnership that is strengthening each day and we sincerely hope to upgrade it to a strategic partnership," the diplomat said.

"We believe that 'strategic' more accurately describes the work we are already doing together."

He underlined that Washigton's Indo-Pacific Strategy and Indo-Pacific Economic Framework make it clear that this partnership and Vietnam are central to the U.S.’s engagement in this vital region.

Commenting on PM Chinh's coming visit to the U.S., the ambassador said the premier’s busy schedule for this trip represents the importance of the Hanoi-Washington relationship, including in health, education, security and defense, trade, and development.

The PM will meet not only with the U.S. leadership but also with private sector partners who are leading the way in innovation, digital transformation, and green production, Knapper added.

Asked about the prospects for cooperation between the U.S. and ASEAN in the future, the ambassador said Washington will deepen its long-standing cooperation with the bloc by launching new high-level engagements on health, climate and environment, energy, transportation, and gender equity and equality.

“The U.S. remains the number-one investment partner in ASEAN member countries,” he stated, adding that the U.S. is also a proud partner of Vietnam within the grouping.

Vietnam is a major player on the world stage, as evidenced by its successful two-year term on the United Nations Security Council that just ended, the ambassador commented.

The U.S. has worked with Vietnam on a series of issues related to the shared goals of regional and global peace and prosperity, with Washington's support for Hanoi's deployments to UN peacekeeping missions being a prominent example.

“We are proud of our work with the Vietnam Peacekeeping Center to help provide equipment, training, and exchange expertise with Vietnamese peacekeepers,” Knapper stated.

In respect of economic and business relations, Vietnam - U.S. bilateral trade neared US$113 billion in 2021, up 26 percent from 2020, despite COVID-19, the ambassador said.

Enterprises from both sides have invested, and will continue to invest, billions of dollars in each other's critical sectors that impact people’s lives, such as healthcare, energy, technology, and infrastructure.

The U.S. has been a strong partner for Vietnam throughout the COVID-19 pandemic, with the former having donated nearly 40 million doses of vaccines to the latter, said the diplomat.

“We are very proud of these efforts to save lives not just in cities, but in far-reaching rural towns and provinces,” Knapper said.

In addition, the U.S. is also “a solid and committed partner” to help Vietnam achieve its ambitious COP26 goals, including the target of reaching net-zero carbon emissions by 2050, he added.