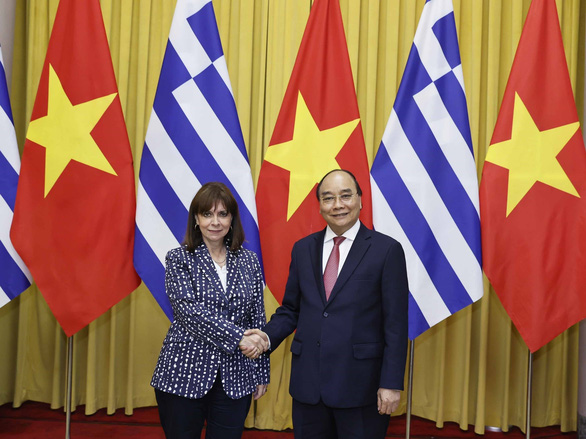 Vietnamese State President Nguyen Xuan Phuc and his visiting Greek counterpart Katerina Sakellaropoulou pledged to take steps to promote bilateral relations to a new height, sharing their pleasure at the growth of the Vietnam - Greece ties.

The host and guest expressed their wishes to further promote the bilateral ties during their talks in Hanoi on Monday, one day after President Sakellaropoulou arrived in the Vietnamese capital for a five-day official visit to Vietnam at the invitation of President Phuc.

The Greek leader applauded the important achievements that Vietnam made during its previous struggle for independence and in its current socio-economic development.

Highly appreciative of the increasingly significant role of Vietnam in the region and the world, the Greek president said she hoped to foster comprehensive cooperation between Hanoi and Athens.

She emphasized that Greece supports Vietnam in strengthening its partnership and comprehensive cooperation with the EU and further optimizing the EU - Vietnam Free Trade Agreement (EVFTA), thus helping enhance the trade ties between Vietnam and Greece, the Vietnam News Agency (VNA) reported.

President Phuc highly valued the visit by Sakellaropoulou and believed it would contribute to deepening the friendship and cooperation between the two nations.

He greatly appreciated Greece’s early ratification of the EU - Vietnam Investment Protection Agreement (EVIPA) and suggested that Greece support and call for the removal of the EU’s ‘yellow card’ against Vietnamese seafood exports for illegal, unreported, and unregulated (IUU) fishing.

The Vietnamese leader thanked the Greek government for make it easier for the Vietnamese community to live, work, and study in Greece, and for donating COVID-19 vaccines to Vietnam.

The two presidents were delighted that trade between their countries increased to US$447 million last year, up 33 percent from 2020 and twice the 15 percent growth in Vietnam - EU trade, despite impacts from the pandemic, according to the VNA.

They agreed to promote their win-win partnership, with focus put on areas of Vietnam’s demand and Greece's strengths, such as shipbuilding, maritime logistics, energy, and agriculture.

At the same time, negotiations for a double-taxation avoidance agreement and another on maritime transport will be accelerated to create a framework for bilateral economic cooperation.

Both sides were committed to strengthening ties in other fields, such as security, defense, education, culture, tourism, sports, and people-to-people exchange.

The two nations will continue their collaboration at international and regional forums, especially in the settlement of non-traditional issues such as pandemics and climate change, the two leaders agreed.

They also discussed international and regional issues of mutual concern, including the maintenance of peace, stability, security, safety, and freedom of navigation and aviation based on international law and the 1982 UN Convention on the Law of the Sea (UNCLOS).