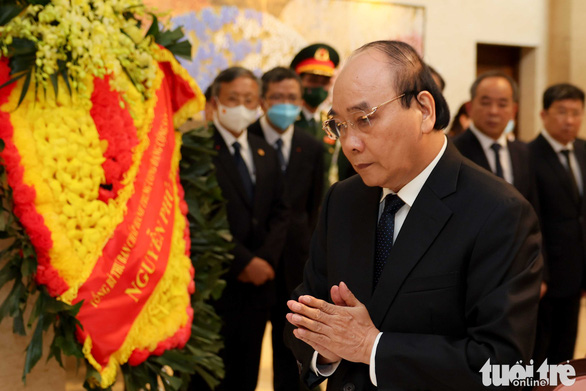 Phuc’s attendance at the funeral shows Vietnam’s affection and recognition for former PM Abe Shinzo's great contributions to promoting the two countries' relations, and at the same time affirming the importance of the strategic partnership between Vietnam and Japan, Hang emphasized.

During his time in office, the former PM visited Vietnam four times and made important devotions to promoting the comprehensive cooperation between the two countries in all fields, the spokeswoman said.

Abe was assassinated on July 8 morning while giving a speech in Nara City as part of his campaigning support for a parliamentary candidate of the Liberal Democratic Party in Nara Prefecture.

The former PM died at the hospital later the same day due to blood loss after being shot in the back twice with a homemade gun by the Japanese suspect killer, 41-year-old Tetsuya Yamagami.

The Japanese government decided to hold a national mourning for Abe on September 27 with the attendance of about 6,000 international guests.

In addition to President Phuc, the funeral will also be attended by about 50 leaders and former leaders of other countries, including U.S. Vice President Kamala Harris, Australian Prime Minister Anthony Albanese, Indian PM Narendra Modi, former British PM Theresa May, and former French President Nicolas Sarkozy, among others.

Since their establishment of diplomatic ties on September 21, 1973, Japan and Vietnam have fruitfully developed their bilateral relationship and are looking forward to celebrating their 50th year of the diplomatic relations in 2023.