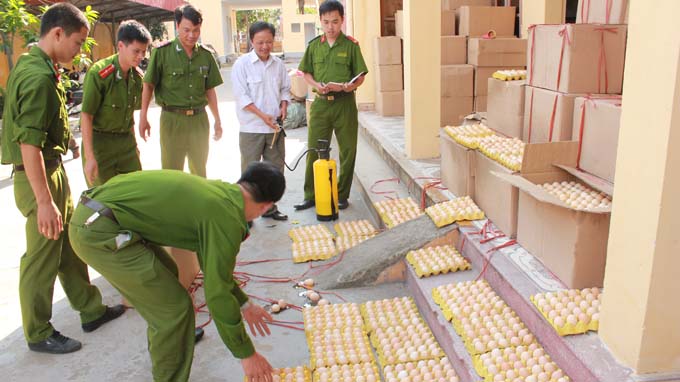 Traffic police in northern Quang Ninh Province yesterday caught a truck carrying a large number of chicken eggs without documents on National Highway 18. They also seized 130 wild geckos carried by a car the same day.  At 4 am on Monday the police stopped a suspicious truck in Tien Yen District for examination and found it transporting 44,000 eggs. The truck’s driver, Duong Van Thanh, 32, failed to show police any documents related to the goods. He said he had been hired by a trader to carry the eggs from Hai Ha District to Ha Long City for sale. Also that morning, the same police unit stopped an Inova car travelling towards Mong Cai Town for examination. Police found a number of plastic cages holding live geckos weighing 90 kg in total and containers in which 40 kg of dead geckos were packed.  The car’s driver told police that he had no papers related to the wild animals and that he had been hired by a woman named Vu Thi Bich Huong to transport them from Phu Tho Province to Mong Cai. The police have handed over all the wild animals to the Tien Yen Forestry Protection Station for handling and all the eggs to the local veterinary office for destruction in accordance with applicable regulations. More than two months ago, a similar seizure of illicit eggs – 40,000 of them – was made in Tien Lang District in northern Hai Phong City by local police and market management officers. The officers found the eggs contained in 90 cartons hidden in a bus on National Highway 10. The bus’s owner, Vu Van Thinh, had no documents regarding the eggs. He said he had bought the eggs in Quang Ninh, which borders China, for only VND200,000 per carton of 420 eggs. Thinh said he intended to carry the dirt-cheap eggs to Thai Binh Province for sale. Police seized all the illicit eggs for destruction.