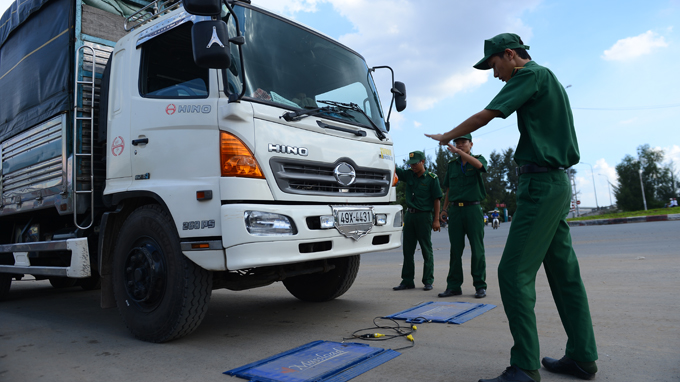 How to handle overloading by vehicles?

Overloading by vehicles has long been considered to cause traffic accidents and damage traffic infrastructure. Concerned agencies have recently voiced their opinions and suggested solutions to tackle the chronic condition.   In southern Dong Nai Province, the provincial Police Department has set up two special police teams to handle overloaded trucks. All members of these teams are not allowed to bring mobile phones with them while on duty. Within six days, from July 8 to 13, the teams handled 353 overloaded vehicles, said Lieutenant Colonel Nguyen Van Ba, deputy head of the provincial Traffic Police Department. Within only one hour on July 8, one of the teams, led by Major Truong Thanh Thao, handled nearly 20 vehicles on National Highway 1 in Bien Hoa City, Dong Nai province. A driver of an overloaded truck complained, “My truck’s actual load is 20 tons more than the allowable load.” Strict punishment, no intervention accepted. Provincial authorities will call on the public to comply with traffic rules and local police will continue to strengthen traffic control and strictly punish overloaded vehicles that threaten traffic safety and cause damage to traffic infrastructure, said Dinh Quoc Thai, chairman of the Dong Nai province People’s Committee. Tran Tien Dat, chief secretariat of the provincial Police Department, said the local police will strictly handle traffic violators and will not accept interference from anyone. “Six months ago, the Ministry of Public Security ordered that all the staff in the police sector are not allowed to interfere in traffic violation cases that are being handled by traffic police,” Dat said. Examinations of loads of vehicles that are travelling on the street will be maintained to detect overloaded vehicles and force them to unload part of the goods or share the load with other vehicles, said Nguyen Van Quyen, deputy head of the Vietnam Road General Department. For transport companies, repeat violators of load regulations will have their business licenses revoked or subject to other sanctions, Quyen said. Lieutenant Colonel Nguyen Van Ba, deputy head of the provincial Traffic Police Department,   said the two special teams have yet to receive any interference while they were handling hundreds of violations related to overloading in the past ten days.“Fee on overloading” Regarding opinions that overloaded vehicles can be allowed if their owners or drivers pay a “fee”, Do Xuan Phu, director of Minh Lien Trading and Service Co Ltd, said he strongly objects to such a proposal. Overloading by vehicles will cause damage to roads and bridges and lead to traffic accidents, so it is unacceptable to legalize overloaded vehicles by imposing such a fee on, Phu explained. Thai Van Chung, general secretary of the HCM City Goods Transport Association, also said such a fee is unacceptable since overloaded vehicles will cause damage to the traffic infrastructure and pose dangers to people. Meanwhile, Quyen said if transport businesses lodge a proposal on allowing overloading by collecting a fee on transporters, then the Vietnam Road General Department would consider it. Nguyen Van Tai, director of the Dong Nam A Trading and Service Joint Stock Company, said such a proposal can be applied in certain cases. “Many vehicles were manufactured abroad and when they carry goods according to their design capacity they still become overloaded under Vietnam’s relevant regulations,” Tai explained.Uniform solutions needed In practice, the application of regulations on handling overloaded vehicles has exposed a number of unreasonable points, many transport businesses complained at a conference held on July 15 with a theme “How to settle the issue of overloaded vehicles”. Nguyen Van Binh, a driver, said, “On National Highway 1A, many bridges has a load of only 18 tons, so most container trucks are deemed overloaded while crossing them, since each of such trucks alone weighs as many as 19 tons. Le Thanh Thao, head of the traffic safety legislation department of Quang Chau Transport Company, said, “In many cases our vehicles carry goods below their load but they are still considered overloaded by some vehicle weighing stations where load calculation is based on axles, a method we have not known and have not been informed previously by concerned agencies.” Regarding this issue, Chung said, “Regulations have yet to be reasonable and sufficient, so the handling of overloaded vehicles has yet been carried out clearly, reasonably and convincingly.” Pham Sanh, a traffic expert, said that overloaded trucks are not only seen in Vietnam but also in many other countries. In Thailand and China, the proportion of overloaded trucks may be up to 20-30 percent. In foreign countries, competent agencies only impose fines on the drivers of overloaded vehicles. Meanwhile, according to lawyer Vo Xuan Trung, drivers in Vietnam in general do not decide on the load of the vehicle while they will be the first to be fined. Also, there should be sanctions on transporters that maintain overloading as a trick to compete unhealthily, he added.