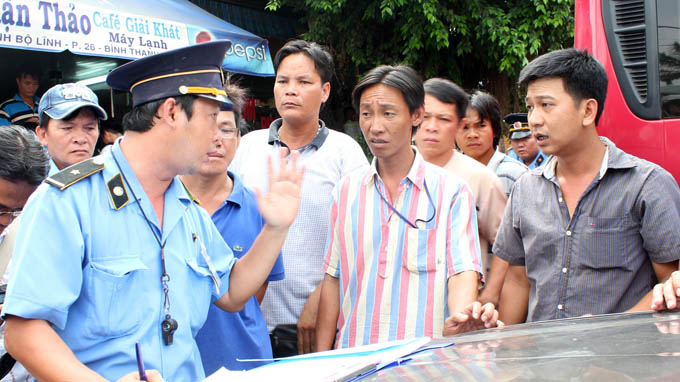 As concerned agencies are fining drivers of vehicles not equipped with a black box, drivers lamented that it is vehicles’ owners or operators, not them, who must pay the fine.    In Ho Chi Minh City, as well as in other localities nationwide, concerned agencies have examined black boxes on coaches, tourist vans and container trucks from July 2013 and given fines to those without a black box. Accordingly, drivers of vehicles without a black box or with an unqualified black box will be fined VND2.5 million (US$720) and have their drivers’ licenses suspended for 30-60 days. Le Hong Viet, deputy chief inspector of the city Transport Department, said his agency has coordinated with the city Railway and Road Police Department conducted inspections at the Eastern Coach Station, Western Coach Station, National Highway 1, Hanoi Highway, Mai Chi Tho and Nguyen Thi Dinh Street in District 2. After ten days of inspection, the joint force has examined 191 buses and coaches and caught 90 of them not having a black box. There were many cases in which drivers did not care about black boxes, even did not know if their vehicle had one or whether the device had been installed.  For example, it took Nguyen Dinh Tai, the driver of a bus, 20 minutes to find the black box on his bus but he could not tell inspectors the code number of the device. He called the vehicle’s owner and the company that provided the device but he was finally fined for failing to provide the code number. Another driver, Dinh Van Duan, told Tuoi Tre that he would have not known where the black box was installed on his vehicle if the vehicle’s owner had not told him about it. “The installation of a black box on the vehicles belongs to the responsibility of vehicles’ owners.”Who should be fined?   According to Viet Thang Transport Cooperative, many transporters have bought black boxes from suppliers that have been listed by the Transport Minister as to be qualified to manufacture them.  “However, when examining those black boxes on many vehicles, inspectors conclude that they were not qualified. So what could transporters do in such a case?” the cooperative said. Lawyer Thai Van Chung, general secretary of the HCMC Transport Association, said the ministry has provided a list of 60 producers of black boxes but it does not know clearly about the actual financial and technical capability of each manufacturer. In fact, among the manufacturers named in the list are those that are unqualified to produce black boxes, Chung said. After granting certificate of qualification to the producers in the list, the ministry has inspected them and then revoked certificates from those that were found unqualified. Meanwhile, many transporters have bought black boxes from those unqualified manufacturers, Chung said. Chung emphasized that in this case, transporters are not at fault and they should not be fined for using poor quality black boxes bought from unqualified producers. “Concerned agencies should impose fines on such producers, not transporters.” On the other hand, vehicles’ owners or transporters, not drivers, are responsible for installing black boxes on vehicles. So it is wrong to impose fines on drivers for not using such devices, Chung said. In addition, by requiring that transporters disclose details of their vehicles’ operations, concerned agencies violate businesses’ trade secrets, Chung added.  According to the Transport Ministry’s requirements, a black box must provide such information as the vehicle and the driver, the vehicle’s journey, the number of stops and their lengths of time, the number of times of closing and opening of the vehicle’s doors, and the driver’s operation, including the continuous time of driving and the total time of driving of the driver within a day.