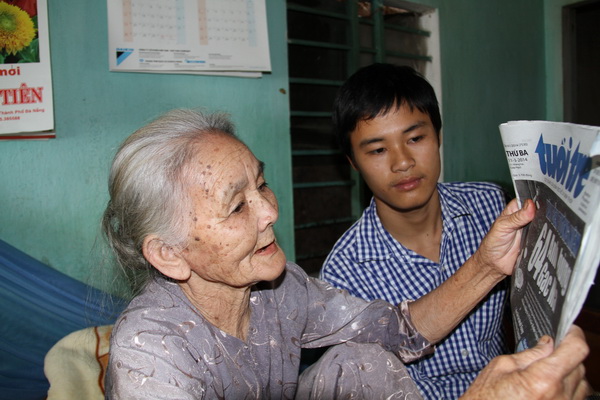 A plan to build a memorial temple in south-central Khanh Hoa Province for 64 heroic Vietnamese combatants who perished in a 1988 battle to protect Vietnam’s sovereignty over Truong Sa (Spratly) archipelago in the East Sea against Chinese invaders has highly been applauded by the heroes’ relatives.

The plan is a part of the program “Nghia Tinh Hoang Sa -Truong Sa” (“Sentimental Attachment to Hoang Sa (Paracel) and Truong Sa (Spratly)"), which will be officially launched by the social charity foundation “Tấm Lòng Vàng” (Golden Heart Foundation) under the Vietnam General Labor Confederation, at a ceremony in central Da Nang City on March 14 –  the day when the 64 combatants died while battling Chinese invaders on Truong Sa's Gac Ma Island 26 years ago.

The program is calling for contributions, at home and abroad, to construct a memorial to commemorate these national heroes. The program will also give support to the parents, wives, children, and relatives of the above 64 officers and soldiers, and of 74 other officers and soldiers of the Republic of Vietnam Navy (the naval forces of the South Vietnam administration before 1975) who were also killed in action while fighting against Chinese forces that assaulted and occupied Vietnam’s Hoang Sa archipelago on January 19, 1974.   “Heroes’ souls will feel warm”Tuoi Tre reporters have recently visited some relatives of the 64 Gac Ma heroes to listen to their responses to the above program. One of them is Do Thi Ha, the wife of Dinh Ngoc Doanh, one of the heroes. When Doanh died, their only child, a daughter, was merely 13 months old.   She said she felt very touched to hear about the program, which includes a plan to construct a memorial temple for the 64 Gac Ma heroes in Khanh Hoa. Doanh’s mother is now 93 years old and is living in the central province of Ninh Binh, where he was born, Ha said. Since his death, Ha and her daughter have burned incense sticks for him on his altar every night, Ha said, adding that they often wish to be able to go to Gac Ma Island one day to pay tribute to Doanh as well as to the other Gac Ma heroes.  Therefore, the building of a memorial temple for these heroes will be a great consolation to their relatives, Ha said.

The temple will be a place for the deceased’s relatives to pay respects to the souls of their beloved ones, she added.

"The heroes' souls will feel warm when such a construction is put up," the woman sobbed. She said that four years after her husband’s death, she worked as an assistant to a mason for 18 years from 1992 to earn money to cover daily living costs and school tuition for her daughter. Ha and her daughter, now a university graduate, are living in a “gratitude house” that was built for them by Doanh’s former unit in  Cam Nghia Ward, Cam Ranh City, Khanh Hoa Province, in 2000.

Vo Ta (L, 1st), 83, and his wife Phan Thi Day burst into tears when hearing their granddaughter read again a letter sent to them by his son before he died in a battle with Chinese invaders on Gac Ma Island in 1988. (Photo: Tuoi Tre)

“I feel at rest now”  Huynh Thi Ke, 83, the mother of Huynh Phu Doan, one of the 64 Gac Ma heroes, said her grandchild told her on Tuesday that Tuoi Tre newspaper published an article about a memorial temple being built in honor of the heroes. Ke, whose husband died 10 years ago, said she was very moved to know about the program to construct the memorial and give support to the relatives of the fallen. The old woman, who lives in Hai Chau District, Da Nang City, said that Doan was the only boy of her two children. “When learning that my son was killed in action, I was extremely heartbroken, but I thought that he had sacrificed himself for the fatherland and such sacrifice is very valuable and also is a great pride to our family,” Ke said. She added she has long wished that the state would build a monument in honor of the Gac Ma heroes, including her son, who died for the motherland. “Now I am very happy to know that everyone in the country is contributing to the building of a memorial temple. This means that everybody still remembers the fallen combatants like my son.” “The fact that there will be an official place for old mothers like me to pay tribute to their sons who died on Gac Ma makes me feel at rest now,” Ke said with a touching voice.Hope for paying respects to son at temple soon  Vo Ta, 83, the father of Gac Ma hero Vo Dinh Tuan, told Tuoi Tre that an altar for his son, who died at 20 years old, has been maintained since the day he died in the battle on the island. “Every day we place food and fruits on the altar for him and think as if he were still living with us,” said the old man, who lives in Ninh Ich Commune, Ninh Hoa District, Khanh Hoa Province. “Twenty-six years ago, when we was informed that a Vietnamese naval ship HQ 604 carrying Tuan and other soldiers, sank after being shot  by Chinese forces, we hoped that some day we could recover Tuan’s body for burial,” said Phan Thi Day, 79, Tuan’s mother. Ta said that the biggest wish of his family is that they can go to Truong Sa and to the island where Tuan died in action to pay respects to him and his companions. “Therefore, we are very happy to be told that a memorial temple for the 64 Gac Ma heroes will be built in Khanh Hoa. We are now quite old, so hope we can light joss sticks for our son at the temple as soon as possible,” the man said.