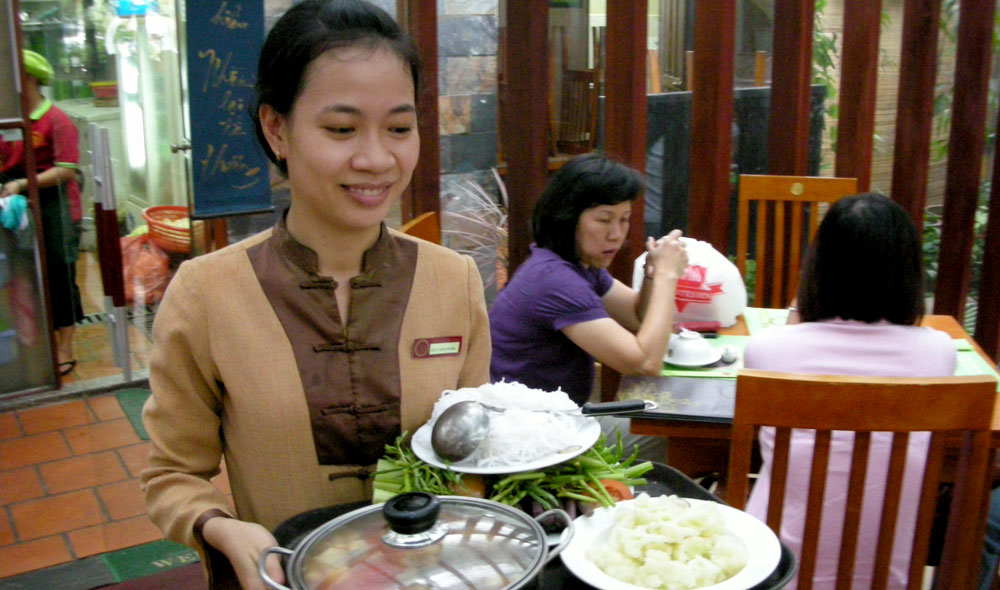 Vietnamese restaurant-goers are as generous as Singaporeans and more big-hearted than Chinese, Taiwanese, South Koreans, New Zealanders, and Japanese when it comes to tipping, a new survey has revealed.

One-fifth of local restaurant-goers in middle-income Vietnam said they left tips behind after a good meal, giving them the 10th place among the 16 Asia-Pacific countries and territories, according to the study conducted by MasterCard between October and November 2013.

The research, which was publicly released by MasterCard on April 7, interviewed 7,932 respondents aged 18-64 in the 16 countries and territories, including Thailand, China, New Zealand, Australia, Singapore, South Korea, Japan, Taiwan, and Vietnam.

Vietnam has the same ranking as Singapore though the latter’s GDP per capita is nearly 20 times higher.

Vietnam’s per capita income is $2,589 while that of Singapore is $49,754, according to figures released by the International Monetary Fund in 2013.

The survey conductor MasterCard said they did not report on how much the tips were and the study was meant to serve more as a tool about good dining practices among different countries in the region.

“Understanding how people tip gives us a unique look into local cultures and accepted practices that we can all benefit from knowing while traveling,” The Wall Street Journal quoted Georgette Tan, MasterCard’s head of communication for the Asia-Pacific, Middle East and Africa regions, as saying.

“Knowing that it’s uncommon not to leave a tip behind in Thailand, for example, will benefit travelers who might not consider leaving any gratuity. In Japan, on the other hand, tipping is not expected, and people there may even ‘frown at the practice,’” she told the Journal.

When asked about the generosity of Vietnamese diners as recorded in this survey, Thao Nghi, who works for a magazine in Ho Chi Minh City, told Tuoitrenews: “It’s good because it proves that Vietnamese are not stingy.”

“I support the tipping culture in Vietnam. If diners are served well, they should leave some tips,” she asserted. “Also, I know the monthly salary of waiters and waitresses in many local restaurants is small.”

Agreeing with Nghi, Trung Pham Le, a tour guide on Phu Quoc Island off southern Vietnam’s Kien Giang Province, said most people working in hospitality live on tips they receive from their customers.

“If customers feel satisfied with restaurant or bar services, they should give them some tips,” he concluded.

Meanwhile, Robert Smith, an Australian expat in HCMC, told Tuoitrenews that there is no need to give tips in restaurants in Vietnam because a lot of them already demand a service fee.

But he said tipping is a cultural thing and revealed that diners in Australia, which ranks 6th in the survey, did not give tips in the past but do so more regularly now.