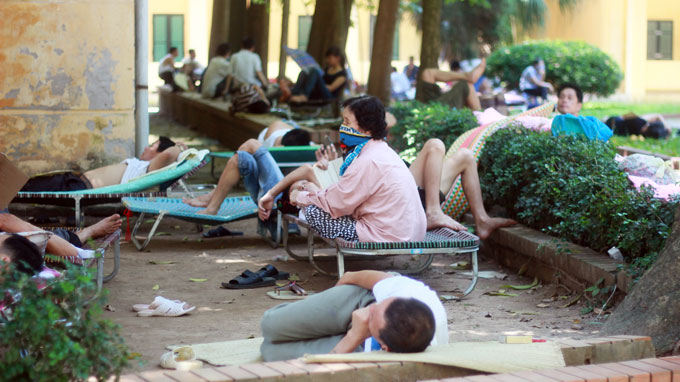 People in Vietnam’s northern and central provinces, including Hanoi, have been struggling with scorching heat in the past few days, with a record 47 degrees Celsius reported; the heatwave is expected to last until later this month.

Temperatures soared up to 41°C-42°C at midday on Huynh Thuc Khang and Lang Streets.

With such weather Hanoi streets were almost deserted of people from 11:00 am to 3:00 pm, when the temperature was at its highest.

The heat has also resulted in a larger number of people who have been hospitalized due to heat-related illnesses.

Several hospitals in the capital city, including Bach Mai and Oncology Hospitals, suffered overcrowding on May 14.

According to Tran Minh Dien, deputy director of the Central Pediatrics Hospital, the infirmary received some 1,200 children on May 14, 4-6 times more than two weeks earlier.

About half of the children are being treated for endocrine, cardiovascular, and blood illnesses and cancer, while the other half have contracted respiratory illnesses and diarrhea—typical summertime ailments.

“With such stifling weather, even healthy adults are prone to respiratory ailments, as people tend to stay in air-conditioned rooms, but the sharp difference between the air-conditioning and the heat outside makes them vulnerable to sore throats, laryngitis, and colds,” Dien noted.

Meanwhile, Associate Professor Pham Manh Hung of the National Cardiology Institute expressed concerns over complications that plague those with hypertension during a hot spell.

He explained that hot weather accelerates the heart, resulting in a rise of blood pressure. Without proper medical intervention, patients may suffer cardiovascular and blood vessel complications, he added.

Other provinces also in the grip of the hot spell

On May 11, Dong Hoi City in central Vietnam’s Quang Binh Province experienced a record high of 47°C and 28 percent moisture. The temperature was recorded at 5:52 pm by a temperature gauge at a park near the Nhat Le River. “Suspicious of the gauge’s accuracy, many locals used their own thermometers, which sometimes showed an outdoor temperature of 48°C,” said a local.

The scorching heat prevented many farmers from working on their paddy fields, while beaches throughout the province were packed with locals and vacationers who came to seek relief in the cool seawater.

According to Le Ngoc Quyet, of the provincial Hydro-Meteorology Center, the highest temperature was 39°C in Huong Khe District and 38.2°C in Ha Tinh City, the provincial capital.

The temperature is expected to stay high for at least two more days before finally decreasing slightly, and the heatwave is predicted to last a week, Quyet said.

With several wards in Ha Tinh City suffering a power cut on Wednesday, many locals were seen seeking relief under trees along the street.