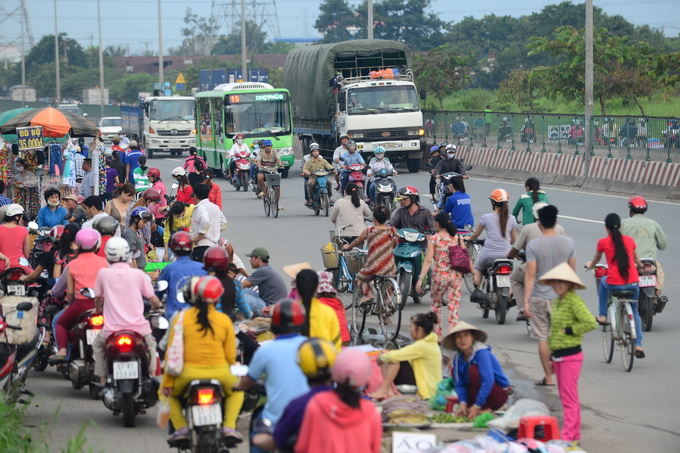 Relevant agencies in Ho Chi Minh City have discovered four new traffic accident hot spots during the first six months of this year, taking the total number of such spots in the city to 25, the city Transport Department reported.

>> Deaths from road traffic accidents in Vietnam down by 4% One of the new areas is the Thu Duc intersection between the Xuyen A (Trans-Asia) Road and National Highway 52, in Thu Duc District. Two serious accidents occurred here on April 6 and 8, killing three people, including a 6-year-old and an 18-month-old baby, and injuring three others. Another hot spot is the My Thuy Roundabout in District 2, where three severe accidents occurred in May and June, leaving three people dead and one injured. Of the three accidents, two were between cars and motorbikes. The flyover at the Cay Go intersection in District 6 is the third hot spot. On January 7 a deadly accident took place at the foot of the flyover, killing one. On April 4, another accident occurred 100 meters away from the bridge at the intersection of Hoang Le Kha and Hong Bang Streets, also leaving one dead. Meanwhile, among the 28 areas identified as accident-prone spots from 2011-2013, 21 have yet to be improved. As such, drivers in the city now face a total of 25 locations where serious accidents often occur, the Transport Department said. Between 2011 and 2013, 64 people died in 68 traffic accidents at the 28 hot spots.

Different causes Nguyen Hong Ninh, director of the Infrastructure Investment and Development Joint Stock Company, the investor of the An Suong-An Lac traffic project, said the company has take numerous measures to improve safety condition on national Highway 1. Regarding the hot spot from Ho Hoc Lam Street to the Tan Tao Tunnel on the highway, Ninh said many vendors occupied the roadside and part of the roadway, causing traffic chaos and contributing to an increase in accidents.  In addition, the section was often submerged in rainwater because the drainage system is clogged with garbage from vendors and their customers. Nguyen Ngoc Tuong, an official from the HCMC Traffic Safety Committee, said that 70 percent of accidents at these hot spots were caused by the failure of drivers to follow traffic rules. In addition, other factors such as the organization and control of traffic, or unsafe or obsolete vehicles, are also possible causes of accidents.

In talking with Tuoi Tre (Youth) newspaper on Wednesday, Khuat Viet Hung, deputy chairman of the National Committee for Traffic Safety, said HCMC is a large city, where many traffic infrastructure projects are in development, so traffic is more complicated than in other areas. Hung requested that the city Committee for Traffic Safety review accidents related to the 25 hot spots to identify the exact causes of the incidents so that the transport department and other concerned agencies can take proper and effective measures to eliminate them.