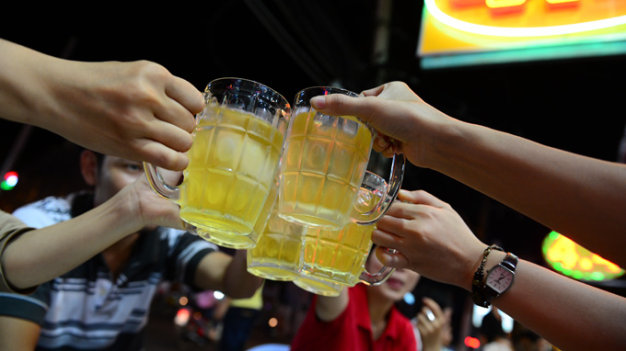 Vietnam to hike excise taxes on alcohol, beer, tobacco in 2016

The excise tax rates on alcohol, beer and tobacco will begin to increase in a year’s time, under the revised Law on Special Consumption Tax, which will take effect on January 1, 2016.

>> 40,000 die of smoking-caused diseases every year in Vietnam The law is among the eight laws that were approved by legislators at the 13th National Assembly’s eighth session that closed on November 28. The Law on Special Consumption Tax has been amended to ensure a stable revenue source for the State’s Budget on the basis of reasonable changes to the tax rates of a number of commodities, Accordingly, the tax rate on tobacco will be increased from the current 65 percent to 70 percent as of January 1, 2016, and to 75 percent as of January 1, 2019. Similarly, the tax rate levied on alcohol with 20 percent concentration or higher will be raised to 55 percent as of January 1, 2016, 60 percent as of January 1, 2017 and 65 percent as of January 1, 2018.   Meanwhile, beer will see a tax rate increase from the current 50 percent to 55 percent from January 1, 2016, 60 percent from January 1, 2016, and 65 percent from January 1, 2018. The special consumption tax is a type of excise tax applied to the production or importation of specific goods and the provision of certain services that are considered luxurious or non-essential. According to the Vietnamese Health Ministry’s Office for Tobacco Harm prevention and Control, the current tax rate on tobacco in Vietnam is among the lowest compared to other countries in the region and is very low compared to those in developed countries.  Vietnam’s tax rate on tobacco now accounts for 41 percent of the retail price on average, the Office said. According to the World Health Organization (WHO), if a tax hike can increase the price of tobacco by 10 percent, then consumption will decline by 5 percent.  Health experts said that an increase in the tax on tobacco is an effective measure to prevent young people from smoking and encourage current smokers to reduce smoking or give up the bad habit, said Professor Luong Ngoc Khue, director of the Vietnamese health ministry’s Fund for Prevention and Control of Tobacco Harms. The has recently warned that Vietnam is one of 15 countries with the highest number of smokers in the world, and around 40,000 Vietnamese people die of smoking-related diseases every year – or more than 100 people per day. Meanwhile, Vietnam is among the 25 countries with the highest increase rates of alcohol and beer consumption per year, the Health Ministry’s Institute of Health Strategy and Policy reported.

Along with increases in alcohol consumption rates, the number of people suffering from diseases related to alcohol and beer such as neurosis, delirium tremens and liver problems has increased, as well as the number traffic accidents caused by drunk driving, the institute said.

In order to minimize the harmful effects of alcohol, the WHO advises that men and women should not drink more than two units and one unit of alcohol per day, respectively.