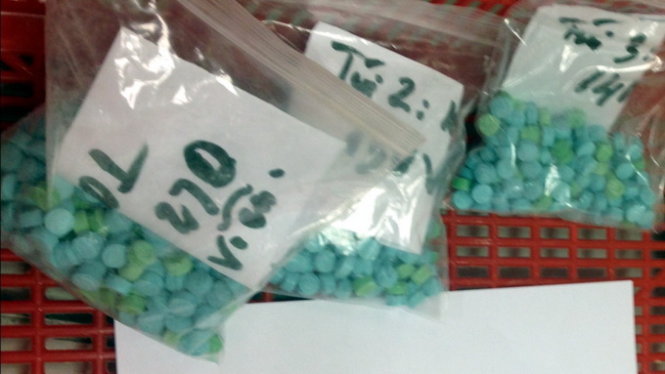 Vietnamese border guards arrested a Laotian woman and her two Vietnamese accomplices in a cross-border drug trafficking case in the northern province of Son La on Thursday.

The woman, whose Vietnamese name is Tenh Thi Sao, was caught carrying 780 synthetic drug tablets on a motorbike from Laos into Vietnam via the border in Son La’s Yen Chau District yesterday evening, according to the anti-drug team of the provincial High Command Border Guard. Sao, 44, a native of the Lao province of Houaphanh, will be charged with illegally transporting narcotics pursuant to Article 194 of the Penal Code, the team said. The team also seized from Sao a small bag of heroin and the motorbike. Sao told the team that two Vietnamese men had hired her to transport the drugs from Laos into Vietnam through the Keo Muong Border Guard Station to deliver to them. From the woman’s testimony, the team captured Luong Van Cam, 44, and Luong Van Cuong, 26, both residing in Son La’s Thuan Chau District, later the same day. The two men admitted to the team that they had bought the drugs in Laos and employed Sao to bring them via the border. The team has handed the three drug traffickers and their drugs over to the Yen Chau District police for further investigation. A similar case was busted in the central Vietnamese province of Nghe An on June 11 when the local border guard force apprehended two Laotians who were illegally transporting a large volume of drugs from Laos into Vietnam. The detainees were Tong Lo, 40, and Lau Lo, 27, hailing from Nong Het Town of the Lao province of Xieng Khouang. The force seized from them ten bricks of heroin, 5,000 synthetic drug tablets, a car, a motorbike, and other items.

Vietnam then transferred the two traffickers and all the drugs and vehicles to the Lao police. Under Vietnam’s Penal Code, those who are convicted of smuggling more than 2.5 kilograms of methamphetamine will be given a death sentence.

The capital penalty is also applied to those who are found guilty of producing or selling 100 grams of heroin or 300 grams of other illegal narcotics.