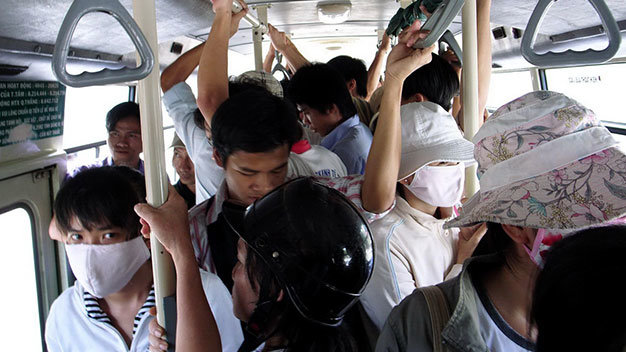 Hanoi not to pilot female-only bus routes for now

A Hanoi transport official announced on Saturday that the city will not pilot bus routes for women only in a bid to combat sexual harassment on public means of transport for the time being.

The information was provided by Nguyen Hoang Linh, deputy director of the capital city’s Department of Transport.

Nguyen Hoang Hai, director of the Hanoi Urban Transport Management and Operation Center (TRAMOC), announced earlier that a bus route intended for women only is poised to be piloted on January 5, 2015.

However, Linh noted that Hai’s announcement is only the center’s proposal which has yet to be submitted to the city’s People’s Committee for approval.

The local transport department will conduct thorough research into the probability of such a route, which is meant to tackle sexual harassment on buses, Linh added.

The bus route could be launched at rush hours if it is proved to be feasible, local officials said earlier.

Early this month, the National Committee for Traffic Safety requested authorities in Hanoi and Ho Chi Minh City to take measures to battle sexual harassment against women and girls on public transportation means, such as buses, and in other public places.

The request was made after the ActionAid Vietnam and the Research Center for Gender, Family and Environment in Development announced in late November the results of a survey conducted on 2,046 people, focusing on sexual harassment in public places in the two cities.

According to the survey, 57 percent of the women aged 16 and above considered the streets are where sexual harassment is most likely to happen.

About 31 percent of the school girls polled confirmed that they had suffered from sexual harassment on buses.

Only 13 percent of the school girls in the survey said they feel safe when they are in public places.

Also, the Hanoi Transport Corporation said there were five cases reporting sexual harassment among more than 43,000 customer calls to its hotline from April 1 to November 31.

After the request by the National Committee for Traffic Safety, Deputy Chairman Hung said on December 15 that Hanoi has required the Department of Transportation, Hanoi Police and Hanoi Transport Corporation to investigate and specify places where sexual harassment against women often happens.

The city has also directed relevant agencies to give warnings and adopt preventive methods like enhancing public lighting.