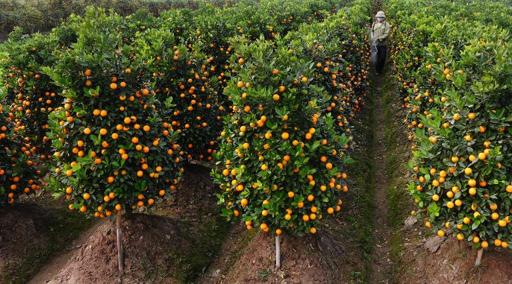 At Lunar New Year, most Vietnamese families buy a kumquat tree -- a symbol of prosperity -- but where once its fruits were candied and enjoyed as a delicacy, now they are left uneaten as food safety scandals batter consumer confidence in local produce.

While Vietnam may not make as many global headlines for safety lapses as neighbouring China, the problems facing its consumers are similar -- and many of the harmful pesticides they fear most come from over the border.

"Every plant is covered in pesticides now. Even the vegetables I buy in the market everyday," retired teacher Mac Thi Hoa told AFP.

Like many Vietnamese who buy kumquat trees to welcome the new year, Hoa used to cook the small orange fruits with sugar to make a sweet treat. Now she has stopped, fearing for her health.

"The sellers claim they don't use chemicals on the tree but I don't believe it," the 65-year-old said, adding she now uses the fruit tree only for decoration.

Kumquat growers say that to make a profit they need to sell unblemished fruit, and they have to make sure their entire orchard ripens just before Lunar New Year -- known as the Tet Festival -- to meet huge demand.

This is difficult to achieve without the liberal use of insecticides and fertilisers.

"The kumquats won't look beautiful," without the use of chemicals, farmer Nguyen Thi Hang told AFP, even though they make the fruit toxic.

If you eat the fruits straight off the tree "it's not good for your health," she said, adding consumers should wait several weeks and wash the fruit carefully to try and remove chemical residue before consuming.

Experts say the fact that even a symbol of prosperity has become a health risk, highlights just how widespread the issue of chemical contamination has become in Vietnam.

Already a major exporter of rice, coffee and seafood, Vietnam is trying to boost fruit and vegetable exports -- which were up by 36 percent year-on-year in 2014 to $1.46 billion, official figures show.

Exported produce is monitored closely for banned pesticides. Fruit has previously been hit by export bans in key markets like Japan prompting improvements.

But domestically, consumers have to take their chances at the markets.

There are regular food safety scandals when produce is found to have exceeded the permitted Maximum Residue Level (MRL) of a pesticide, and state-run media often reports on banned preservatives being found on imported Chinese produce.

Last year, Vietnam spent more than $770 million importing pesticides, official figures show, and experts say much more is being smuggled over the border illegally from China.

At least a third of Vietnamese farmers are not using chemical pesticides correctly, according to Ministry of Agriculture research.

"Any insecticide can be dangerous," farmer Vu Huu Nhung told AFP while spraying chemicals onto his cabbage fields -- eschewing a protective mask -- in Dang Xa commune on the outskirt of Hanoi.

"But I think it's safe enough if you strictly follow the instructions," he said, saying he was unsure what his made-in-China products contained.

According to Professor Nguyen Van Tuat, deputy director of Vietnam's Agriculture Science Institute, over-use of pesticides is already having a "bad impact" -- and things are getting worse.

"Some farmers have increased the amount of chemicals they're using," he said, adding this puts both farmers and consumers at risk of chemical poisoning.

"The chemicals may also eliminate useful insects and could be causing various plant epidemics," he told AFP.

The widespread and largely unregulated application of harmful chemicals has also created a crisis of trust in Vietnam's fruit and vegetable industry, Professor Tuat said.

Consumers "are hesitant -- they don't know where and how to buy safe products, they've lost their trust in (Vietnamese) products' quality," he added.

They also face the risk of widespread bacterial contamination, in part due to poor hygiene standards throughout the food chain.

In December, Vietnam's Association of Standards and Consumers Protection said it had found E. coli bacteria on 90 percent of vegetables sampled in Hanoi.

Some local companies are seeking to produce more organic products, but Vietnam has no rigorous certification process or testing and many struggle to find organic fertiliser and battle cross-contamination issues.

Not everyone is prepared to pay the additional costs for organic vegetables either. Many, like retired teacher Hoa, prefer to take their chances in the market.

"Clean or not, we have to eat fruit and vegetables every day," she says. "Everyone dies in the end, we'd rather die with a full stomach than an empty one."