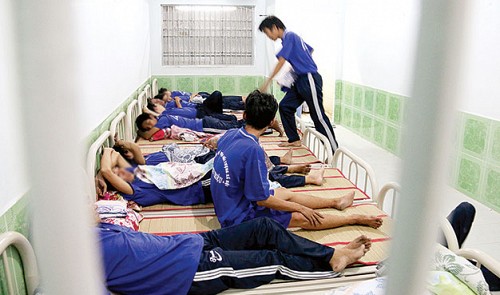 All drug addicts in Ho Chi Minh City must register for detoxification by the end of next month, the head of the municipal Department of Labor, War Invalids, and Social Affairs has announced.

This is the order by local authorities to boost drug detoxification for junkies following a decision on March 20, Tran Trung Dung, director of the department, said at a meeting on Monday.

Although the same work on enabling local drug addicts to conduct detoxification at home and in their communities has been ongoing since 2012, the results are very limited due to the lack of statistics, voluntary declaration from the junkies and their families, as well as qualified and efficient facilities and staff, Dung said.

Currently, there are approximately 10,000 drug addicts with records under management at the local level.

As a result, district authorities must urgently set up specific plans to enable drug addicts under their management to sign up for the detoxification programs through their families and communities before the end of next month, he added.

The department has issued regulations guiding the implementation of drug detoxification for the addicts in their families and communities.

Accordingly, the addicts or family members must voluntarily register for the program, or the police chief of their community will propose compulsory measures.

After six months, if the detoxification program yields no positive result, the community would suggest filing for a court decision for compulsory detoxification at local rehabilitation centers.

The district may contact nine rehabilitation centers, including five public establishments and four private facilities, to carry out the treatment and detoxification process for drug addicts. Those in disadvantaged situations, like the poor, will receive support from the city.

In early December last year, many rehabilitation centers resumed work after being closed down for around a year due to accusations of human rights violations.

The resumption followed the passage of a regulation clearly defining compulsory drug treatment and detoxification.

The centers were shut down as they had been denounced for making detoxification forceful. A pilot voluntary program for drug detoxification was then in place but proved ineffective because most junkies dropped the program halfway through.

In addition, the majority of drug addiction cases in Vietnam are related to crimes and violations.

As many as 70 percent of snatching and robbery cases in the Southeast Asian country are linked to drug addicts and 80 percent of junkies have a low education level, Nguyen Thanh Tai – former deputy chairman of the People’s Committee of Ho Chi Minh City and chief of the drug detox project in the city, once told Tuoi Tre (Youth) newspaper.