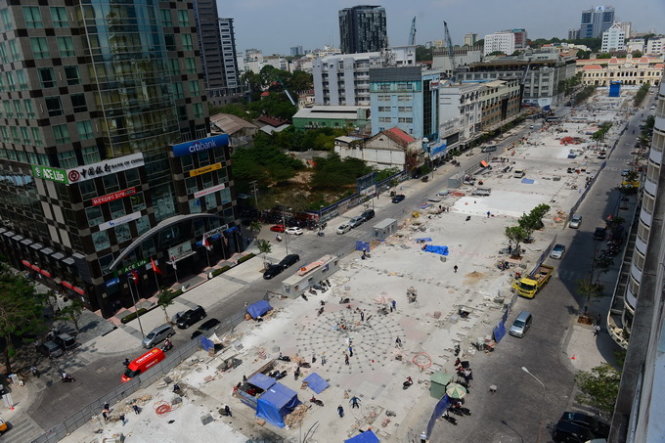 Nguyen Hue Street in downtown Ho Chi Minh City, which is expected to open to the public by the end of this month, will serve as a pedestrian street on weekend nights first before opening as such on a 24/7 basis, the project investor has announced.

The Ho Chi Minh City People’s Committee has just tasked the Department of Transport with managing the pedestrian street, located in District 1.

According to Ngo Ba An, vice director of the transport department’s Urban Traffic Management Zone No. 1, which is the project investor, it would take some phases for the street to turn wholly pedestrian-only.

The zone has proposed that Nguyen Hue Street be turned pedestrian-only from 6:00 pm to 11:00 pm on every Saturday and Sunday night.

Outside the above-mentioned time, the street will be open to traffic on its two lateral sections, which border the pedestrian part in the heart, An added.

“After people get used to the pedestrian street and the street boasts diverse activities and teems with life, it will be turned into a pedestrian-only square every night throughout the week, while it remains open to traffic on the two lateral sections in daytime,” he noted.

Nguyen Hue Street will become a full-time walking venue only when the zoning gets complete and it is connected with several future pedestrian streets in the vicinity.

At a recent meeting, competent agencies and other relevant units reached a consensus on the Urban Traffic Management Zone No. 1’s proposal regarding the Nguyen Hue pedestrian street’s development phases.

The pedestrian street will also boast art, exhibition and sports activities, and will be lined with mobile stands that offer for sale a wide array of mementoes and food specialties.

The municipal People’s Committee has also assigned relevant agencies to study the plan that will allow restaurants and hotels to open on certain parts of the street’s sidewalks, An said.

He also addressed public concerns that the Nguyen Hue pedestrian street may not appeal to many due to its serious shortage of parking lots.

He cited a survey by the Department of Construction as saying that there are at least 59 building basements featuring parking lots within a 500-meter radius from Nguyen Hue Street.

An added his zone’s study showed that there are 27 parking lots on streets near Nguyen Hue.

However, most of the parking lots are internally used and only four or five of them are open to visitors but do not offer overnight parking services, An acknowledged.

He added the District 1 People’s Committee is set to meet with parking lot owners and propose they offer night parking services.

An pointed out that certain bus services will be offered to carry passengers to the pedestrian street.

Bus stops will be positioned near the metro line terminal so as to diversify passengers’ options and allow them to use the public transport service with maximal ease.

Relevant agencies are also working on setting up electric car routes as well, he said.

Owners of businesses operating along the pedestrian street are also welcome to offer such electric cars to give pedestrians fun, convenient rides, An noted.

Construction of the Nguyen Hue pedestrian street has been over 90 percent complete, and the street is poised to open to the public in time for the upcoming Reunification Day holiday, lasting from April 28 to May 3.

An added that enterprises will be asked to offer free Wi-Fi, and install electric notice boards or interactive screens within the Nguyen Hue pedestrian street to provide visitors with information on bus and metro routes and others.