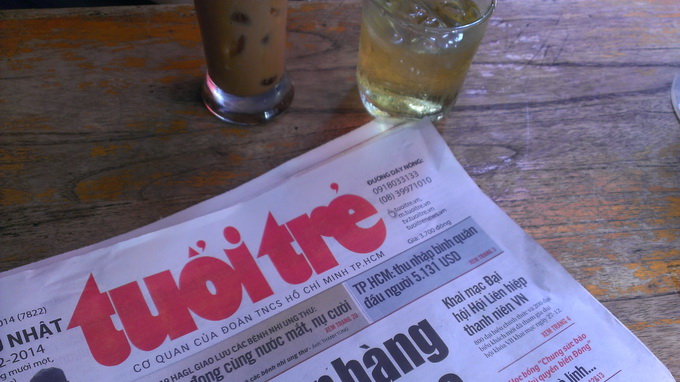 Briefs of some of the leading news stories published Wednesday (May 7) in Tuoi Tre (Youth) newspaper:

-- Lieutenant Khac Ngoc Tan Hao, head of the guard team at late General Vo Nguyen Giap’s tomb in the central province of Quang Binh, said that more than 3,000 people came to the province’s Vung Chua, Yen Island to burn incense on Wednesday on the occasion of the 61th anniversary of the Dien Bien Phu victory over French colonial forces (May 7, 1954 – May 7, 2015). The number is expected to sharply increase on Thursday, Lieutenant Hao said.

-- The Transport Engineering Construction and Quality Management Bureau has directed enterprises, project managers, and 18 departments of construction in southern provinces not to use dioxin-infected rocks and soil to build traffic works.

-- Police in the southern province of Ca Mau is working to find the cause of an accident which led to 11 passengers on a bus being hospitalized on Tuesday. Initial information showed that one tire of the bus operated by the Giap Diep commercial and transport limited company suddenly exploded, caused the vehicle to lose balance before crashing into the sidewalk. The accident occurred when the bus cross the Chech Tung Bridge en route from Khanh Hoi Town in U Minh District to Ca Mau City.

-- President Truong Tan Sang has recently signed a decision to award the third-class Labor Medal to Ho Khanh and Howard Limbert for their contribution to exploring and researching caves at Phong Nha – Ke Bang National Park in the central province of Quang Binh.

-- Doctor Hoang Cuong from the Central Eye Hospital said pinkeye has started to spread in Hanoi. Since the beginning of this week, the hospital has admitted around 100 patients per day for pinkeye examinations.

-- Huynh The Nang, general director of the Vinafood 2 company, has been elected chairman of the Vietnam Food Association.

-- The Ministry of Agriculture and Rural Development said it has recently ceased granting approval for importing poultry from the U.S. due to the complicated situation of avian influenza there.

-- Flower growers and experts from Sa Dec City in the southern province of Dong Thap will have a trip to the world’ famous flower-growing areas in the Netherlands, Germany, and the Czech Republic to learn about the techniques applied there. The trip lasting from May 9 to 18 is part of the city’s plan to develop the Sa Dec flower village by 2020.

-- Etgar Keret, known as a master of short stories in Israel, had an exchange with Ho Chi Minh City readers on Wednesday on the occasion of the Vietnamese version of his 6th book being released recently.