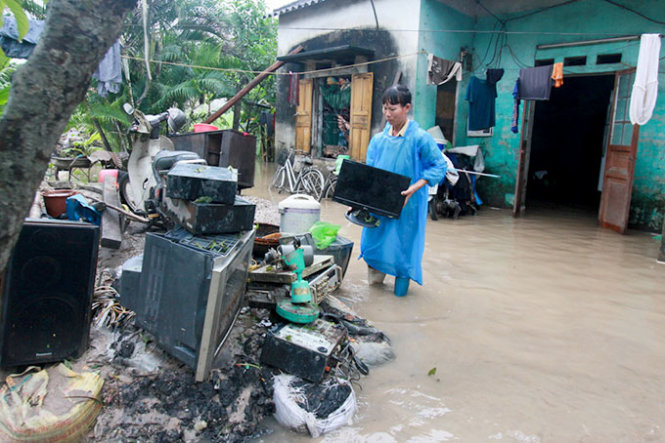 Authorities in Quang Ninh Province in northern Vietnam should realign its residential areas to better protect people from the risk of flooding, Minister of Construction Trinh Dinh Dung has said.  The minister offered the suggestion when he met with provincial authorities during his trip to inspect the flooding situation and its consequences in the province on Monday. Heavy rains and subsequent floods that first struck Quang Ninh on July 26 are considered the worst in the past 40 years, with total rainfall of about 1,500mm received over the past nine days, local authorities said. By Monday, the disaster had killed 17 people and injured many others in the province, causing total damage of VND 2.7 trillion (US$123.8 million), according to the local People’s Committee. Nearly VND1.2 trillion ($55 million) of the amount was incurred by coal plants under the Vietnam National Coal-Mineral Industries Holding Corporation Limited. Heavy rains and floodwaters have destroyed or heavily damaged nearly 10,000 houses in the province, submerged and ruined some 4,000 hectares of rice and other crops, destroyed 1,200 hectares of aquaculture and swept away more than 2,000 cattle and poultry, according to statistics. The damage has exposed a number of weaknesses in the planning of urban residential areas in Quang Ninh, Minister Dung said. There are now irrationalities in urban planning that the province should address soon, he said. After the ongoing flooding ends, the ministry will offer assistance and consultancy to the province in re-planning such residential areas to make them safer, the minister promised. In order to provide new homes for flood victims, the ministry will send experts to help the provincial Department of Construction with building proper and safe resettlement areas, the official said.