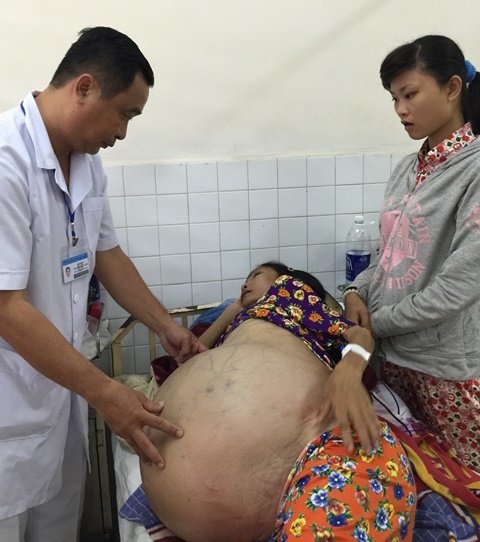 A cancer patient has recovered from surgery that was performed at the Ho Chi Minh City Oncology Hospital a week ago to remove a 40kg cyst from her ovary, doctors said on Sunday.

Pham Thi Tuyet M., 49, of the southern province of Long An, was in a stable condition after the surgery, but will remain at the hospital pending chemotherapy for her ovarian cancer, which was confirmed after the operation, Dr. Le Hong Minh, director of the hospital, said.

The surgery was conducted on October 12 after many consultations were held between doctors of various specialties, including respiration, cardiology and hematology, Dr. Minh said.

Doctors decided to perform the operation on M. as the huge cyst was pressing against multiple organs and made it hard for the patient to breathe.

The skin of the cyst weighed about 2kg while 35 liters of fluid and three liters of blood were found inside the growth, said Dr. Nguyen Van Tien, acting head of the infirmary’s Surgery Department.

The overall weight of the tumor was around 40kg, doctors said, adding that M. was hospitalized with her weight at 90kg, her waist 133cm around and her abdomen 83cm long.

Due to the huge tumor, M. could not walk unassisted and constantly suffered difficulty breathing, they added.

This is the largest ovarian tumor that doctors at the hospital have ever removed, Dr. Minh said, adding that the clinic paid all the expenses related to M.’s surgery and treatment.

Her relatives said she had lived with the huge cyst for nearly 10 years, as the woman and her family could not afford surgery.