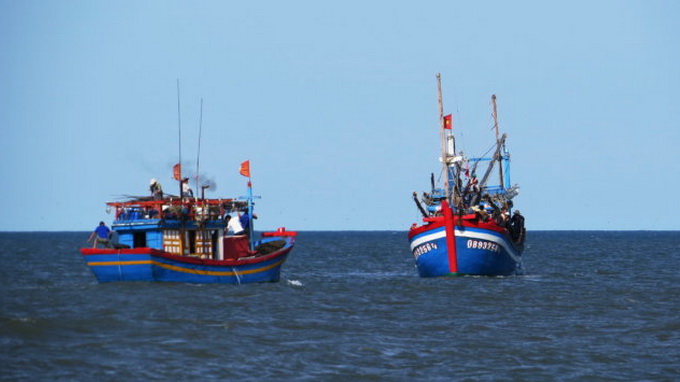 The Vietnam Fisheries Association has issued a document to denounce China’s illegal ban on fishing in the East Vietnam Sea, its president said.

Nguyen Viet Thang, president of the Vietnam Fisheries Association, said the association had sent a document to the Office of the Government, the Ministry of Agriculture and Rural Development, the Ministry of Foreign Affairs, and the Central Party Committee’s Commission for External Relations to publicly protest the unlawful move by Chinese authorities.

The opposition followed an announcement by authorities of Haikou, in China’s Hainan Province, of a ban on all fishing activities in the sea area from 12 degrees north parallel to the border of the waters of China’s Guangdong Province with Fujian Province (including Vietnam’s Tonkin Gulf).

Around 8,000 Chinese fishing vessels, which account for 32 percent of all fishing boats of Hainan Province, had returned to shore by noon on Monday to obey the ban.

In its protest, the association said the illegal seasonal ban by the Chinese has been in place for many years, interfering with the production activities of Vietnamese fishermen, violating Vietnam’s maritime sovereignty over the two archipelagoes of Truong Sa (Spratly) and Hoang Sa (Paracel), and Vietnam’s jurisdiction over the waters under the 1982 United Nations Convention on the Law of the Sea (UNCLOS).

“The Vietnam Fisheries Association strongly opposes the unilateral, preposterous, and legally invalid ban by Chinese authorities,” the association declared in its protest.